The villa was originally discovered in 1879 when local children showed fragments of Roman pottery to retired army captain John Thorp. He used a probe to find the whereabouts of the villa and the next year the farmer William Munns discovered a fine mosaic when digging a posthole. Under the light of a lantern, he and the Captain uncovered the most famous mosaic of all, the cock-headed man. 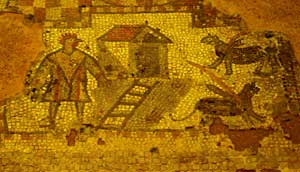 The sum of £350 was raised to carry out an excavation and two archaeologists, John Price and F.G. Hilton Price came from London to undertake the work. Unfortunately, the professionals excavated crudely and much of the evidence was shovelled out by labourers, and it was left to the local amateur, Captain Thorp, to keep precise records. A number of fine mosaics were uncovered and so a leading local family, the Oglanders, bought the land, and cover buildings were erected to protect the mosaics. 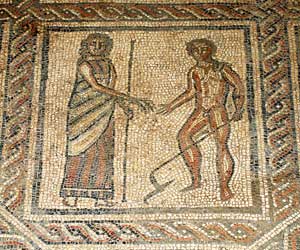 The site became one of the best known Roman villas of its day, but during the 20th century it became largely forgotten, and the buildings gradually decayed. The crisis came in 1994, when the site was flooded and the mosaics in the audience chamber were submerged by flood water contaminated by agricultural fertiliser. Something had to be done, and the Trustees decided that the whole cover building needed to be totally rebuilt. A grant was obtained from the Heritage Lottery Fund and now a splendid new cover building has been erected, with some of the mosaics re-laid, and a spanking new presentation. It is now open to the public and doing good business. However, it still remains a private property; it receives no grant either from the government or from the local authorities and leads a slightly precarious existence. If anyone cares to take a Roman Villa under their wing and leave them half a million pounds in their will, it would be most welcome. 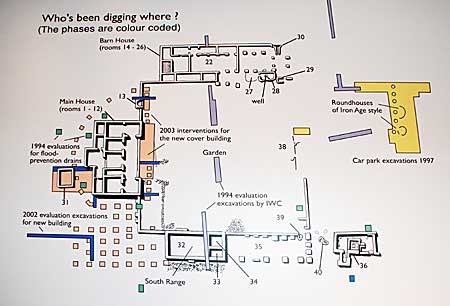 Plan of villa. Main building to the left, the barn building at the top

It is an interesting Roman villa. It is essentially medium-sized villa, being a small courtyard villa with buildings on three sides. The main building is a winged corridor villa, with a broad corridor linking the two wings.  There are fine, though now fragmentary, mosaics in each of the principle rooms in the wings. The whole building faces east, across the courtyard and one imagines there would have been a fine garden layout in the front — indeed a Roman-type garden has been laid out. 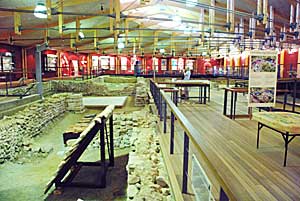 The farm buildings are in the two wings. The south range appears to have been given over to a granary and to crop processing. The north wing however consisted of one of the large barn-like buildings that are sometimes rather too grandly called aisled basilican buildings, which is where the foreman and the principle workers would have lived and where the main work of the farm would have been carried out. They are in a way even more typical of a Roman villa than the winged corridor buildings, though as they rarely contain mosaics, they are not so frequently excavated. However, the excavators in 1880 uncovered  the building after a fashion, following along the tops of the walls and establishing an outline plan. 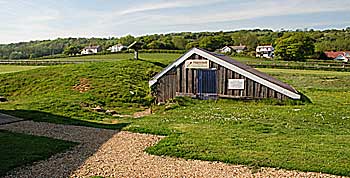 Shed at one end of the barn building, covering a hypocaust. Note the excavators’ original spoil heap to the l;eft.

At one end they found a fine hypocaust over which a wooden shed was erected which is still standing, in itself a fine reminiscence of Edwardian-style archaeology. At the other end there is a well which the excavators dug out down to a depth of 18 metres and also some adjacent hypocaust pillars which are presumably a set of baths: were these the only baths in the villa, so that the owners had to come down   and join in with the farm workers when they wanted a bath? Or is there another set of baths still to be discovered? Around the building are some grassy mounds which at first sight make good viewing platforms until one realises that they are the Victorian spoil heaps, which have never been backfilled. 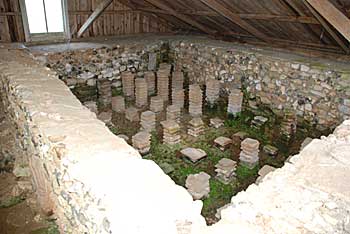 Inside the shed, showing the hypocaust

It is this northern building which Barry Cunliffe and Mike Fulford now intend to excavate. It will be extremely interesting to have a proper exploration of what was in many ways the heart of the villa, and at the same time it will bring the villa valuable publicity. We hope that many readers of CA will be drawn to visit the Isle of Wight, to see the excavations and explore the island.

Butser: the future of education?