Before the conquest of Wales by Edward I in 1283, the Welsh Kingdoms were flourishing. Yet archaeologically, little is known of this period. There are ‘native’ Welsh castles, but these are late and peripheral: the centre of Welsh culture lay in the royal courts – the ‘llys’ (pronounced “leese”). For the first time, one of these llysoed is now being excavated at Rhosyr. 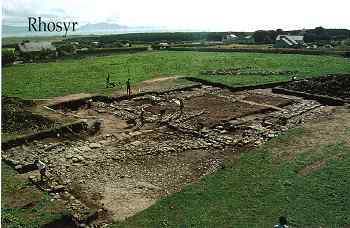 Here we see the excavations at an early stage. Note the level ground, and the great fertility of the Isle of Anglesey. In the background is the narrow strait that separates Anglesey from Wales, and in the distance are the mountains of Snowdonia.

At this point we must pause, and make a brief excursus into the Welsh laws. According to the laws, a primary division of the kingdom was the cantref, literally one hundred townships. Each cantref was subdivided into two commotes: each commote is made up of 48 townships. But, you will say, where are the missing two townships? These belonged to the king ; one was the King’s Waste, or the Ffridd, and it was here that many of the castles were eventually built. The remaining township was the maerdref, or royal demesne. This had the best land in the kingdom, and it was here that the llys, or royal palace, was built.
Here we see a plan of the Gwynedd, showing its division into commotes. The site of Rhosyr is ringed.

How the llys was discovered 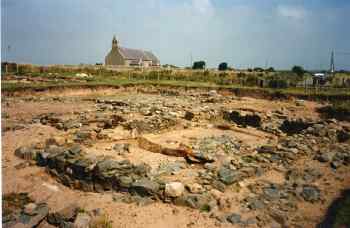 The llys at Rhosyr lies just outside the town of Newborough, which was one of Edward I’s new boroughs. Here we see the main hall in the foreground, and in the background is the church, which lies outside the present-day town. This suggests that the church was ancient, and indeed it was sacked by the Normans, in 1157.

The field adjacent was called Cae Llys, and this suggested to the excavator, David Longley, the director of the Gwynedd Archaeological Trust, that this might be the site of the original llys.

A guided Tour of the Llys

Here we can begin to see the plan of how the llys was laid out.
The palace buildings lay in a walled courtyard – the surrounding wall still survived three feet high in places.
The entrance was through a gateway to the right. A path then leads up to the great central hall, seen on the previous page. It overlies an earlier, smaller hall.
To the south is an adjacent chamber: note the curving passageway leading to another room not yet excavated in the south east corner. We shall see this in our next page. In the north east corner is a subsidiary building, excavated this last summer.

From court to Palace 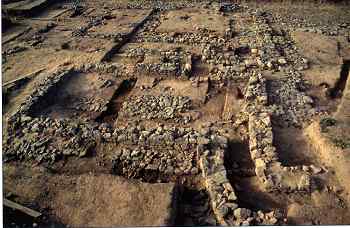 In its final stages, the llys was growing in sophistication: the court was changing into a palace.
Here we can see the change in progress. Originally it was laid out as a series of disconnected rooms: in the foreground is the ‘chamber’ with the main hall beyond it. But the individual rooms were being linked up, and the curved passageway in the foreground leads to a small room, as yet unexcavated. This marks the growing sophistication of the planning of the llys.
Alas! further development was not to be; in 1283 the English King, Edward I defeated the Welsh, and the Welsh king, Llywelyn Fawr (the ‘Last’) was killed; the llysoedd no longer had a role to play, and fell into disuse. The food renders were no longer paid, replaced by money taxes, which were paid to the new castles erected by Edward. In the great sandblow of 1330, Rhosyr was overwhelmed, and the remaining inhabitants moved to the new town of Newborough, established by Edward, a mile to the east.