A Neolithic complex has been found in Orkney (Scotland) that rivals the importance of the well-known Skara Brae site. Only a small part of the 4-5,000 year-old, 2.5 hectare site has so far been unearthed, including large, well preserved stone buildings, (some believed to be ritualistic in nature) and other structures which are likely to have been domestic. The site lies between the Ring of Brodgar and the Stones of Stenness.

Excavations began in August and were directed by Nick Card, with a team from Orkney College and Orkney Archaeological Trust. Mr. Card said: ‘The discovery has the potential to illuminate how these different sites interacted as part of a larger ritual complex. More and more we are realizing that this was a landscape populated by monuments as well as people’.

Mr Card continues: ‘What we have uncovered is a whole series of buildings; some of which are of a kind never seen before. Some of the structures do appear to be domestic in nature but one, the main structure in Trench P, is much more complex, with very symmetrical architecture much like Structure 2 at the nearby settlement of Barnhouse. This structure also exhibits several phases of use and major remodeling of its architecture,’ 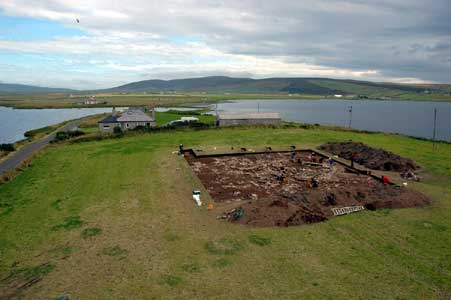 View of trench P with the Stones of Stenness visible in the middle distance and Barnhouse to the left.

Other findings include a polished stone mace head, pitchstone (a volcanic glass) from Arran, as well as stone tools and burnt animal bones. Mr Card said that the team had uncovered Grooved Ware pottery by the bucketful with both incised and applied decoration. Several examples of Neolithic art have also been found with incised geometric designs similar to those discovered at Skara Brae. Most of these appear on the walls of three separate structures but also on a thin stone slab recovered from the reuse of a large oval structure with radial stone divisions in Trench J.

Additionally, evidence of a massive prehistoric wall has been found. Interestingly, geophysics scans of the area showed that building to the south-east of the stone circle stopped abruptly and that an area to the north was maintained as a definite ‘no-go’ area, which may indicate that the wall separated the realms of the dead and the living. Nick Card explained: ‘What the excavation has shown is that this building cut-off point seems to be differentiated by this massive monumental wall. Judging by the width of the four to five metre wide foundations you’re looking at something extremely large and very impressive, with the most beautiful stonework incorporated into the   side facing the Ring itself. It wasn’t defensive. It was more like a symbolic boundary, separating the activity on the south-east of the Ness from whatever activity was going on around the Ring of Brodgar.’

The wall’s discovery fits in with a theory proposed a few years ago by Mike Parker Pearson that the two stone rings had specific roles in Neolithic life – in particular representing life and death. The Standing Stones of Stenness, with its central hearth and surrounded by evidence of feasting, settlement and activity, may have represented life and the world of the living. In stark contrast, the Ring of Brodgar, with its marked lack of domestic activity and later surrounded by a complex of Bronze Age burial barrows, could have represented death, or a spiritual domain of the ancestors.

Mr Card said: ‘From the geophysics scans, we knew this area would be extremely rich in archaeology and what we have uncovered over the past five weeks is merely the tip of the iceberg. As this season’s excavation draws to a close, we’re really just glimpsing a tiny percentage of what is actually here – there’s a whole sequence of buildings on the site, one after the other. Who knows what else is hiding under these later structures.’