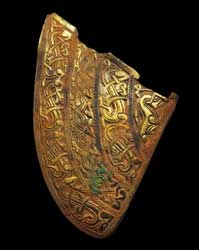 Britain’s biggest ever Anglo-Saxon hoard has been discovered, almost 70 years to the day since gold was first unearthed at Sutton Hoo. Is this electrifying new find evidence of trophy collecting by the kings of 7th century Mercia?

The largest Anglo-Saxon hoard ever found in Britain has been discovered in a Staffordshire field by metal detectorist Terry Herbert. The find — of over 1,300 gold and silver objects — is set to rewrite Anglo-Saxon history. Consisting almost exclusively of silver, gold and garnet-inlaid sword hilts, pommels, helmet fragments and other martial objects of stunning craftsmanship, the hoard appears to be made up of war trophies stripped from vanquished enemies. Could this be the wealth of the Kingdom of Mercia, ritually deposited in thankfulness for victory in battle? One can only speculate. What is certain is that this hoard is the evidence of Mercia’s turbulent history confirmed before our eyes.

The Staffordshire Hoard is highly selective in its composition, and consists almost exclusively of weapon parts and martial items. Only the richest parts of each object were selected and the hoard also contains many unusual items for which there are no known parallels. The workmanship and materials are of the very highest order, and the beauty of the objects is startling. In trying to describe them, archaeologist Alex Jones, site director for Birmingham Archaeology, brought in to excavate the find site, said: ‘At first, I thought: this cannot be real. It’s stunning. Absolutely unbelievable.’ 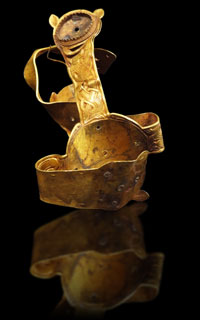 The material from the hoard doubles the amount of metalwork that we have from this period; in that way, it is like finding a new Lindisfarne Gospel. Helen Geake, National Finds Advisor for the Portable Antiquities Scheme, confirms that the find will redefine our understanding of the Anglo-Saxons. ‘It is the only hoard of its type ever found on English soil; until now, we didn’t know that this kind of behaviour existed within Anglo-Saxon culture,’ she said, adding that ‘the Staffordshire Hoard will change perceptions as much as Sutton Hoo. It will take years to understand fully the many implications of this find.’ What can be predicted is that research on the objects will contain revelations about every aspect of Anglo-Saxon scholarship, including cultural links, trade and economy, chronology, technology and crafts, ritual and religion, historical events, and the eventual re-interpretation of other major Anglo-Saxon sites.

Contents of the hoard
The hoard consists of 1,346 items, of which 655 are of   gold and 504 of silver. Most of the objects had been damaged prior to deposition: the gold had been bent, twisted and sometimes broken. The silver, being less malleable, was broken rather than bent and is more highly fragmented. Much of the damage appears to have occurred when these fittings were detached from their original settings or during the compaction of larger pieces to fit into a small space. It appears from their condition that the larger gold items only entered the plough soil recently, and may have been enclosed in a chest or other vessel until the former pasture was deep ploughed last year.

The hoard is principally made up of fittings that come from the hilts of swords. The hilt, or grip, of a Saxon sword typically had three parts. At the end was the pommel below which were four plates, two on each side of the grip. The grip itself was decorated by two or more collars at the point where the hilt is joined to the blade.

In this assemblage, 84 pommel caps have so far been identified — 68 of gold, 11 of silver and five of copper alloy. It is likely that some of the pommels were used on a seax, a short single-edged sword/knife. In addition to the caps, there are 135 plate fragments (106 of gold, 24 of silver and five of copper alloy), some of them decorated with cabochon garnets. There are 71 hilt collars (66 of gold, two of silver and three of copper alloy). Then there were ten sword pyramids, toggles that might have been used in suspending a scabbard from a belt — all of gold but for one silver example. There were a total of 427 undecorated pieces found, consisting, in the main, of plate fragments or scraps of sheet metal, together with what may be helmet fragments plus two, possibly three, Christian crosses and many other objects that have not yet been identified.

Unusual and unique
There are also a number of gold plates. Some of these may have come from the scabbards, though others may have come from helmets. While the sword fittings are readily recognised, the identification of helmet parts is more difficult.   In the present state of knowledge, there are few fragments that can be unequivocally described as helmet fittings, although one large fragment is likely to be the side-piece for a helmet. Much debate surrounds the precise form of Saxon helmets. The best-known example is that from the Sutton Hoo ship burial, but this is also controversial, as the first reconstruction was almost certainly wrong. It was taken to pieces and painstakingly put together again, and the well-known image is, in fact, this second attempt.   If some of the plates from the Staffordshire hoard do indeed come from helmets, the whole story of Anglo-Saxon helmets could well be about to be rewritten yet again, but on the basis of considerably more evidence. 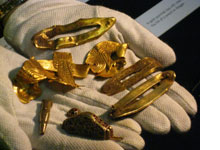 Perhaps as striking as what the hoard contains is what was not found. There are no feminine dress fittings, such as brooches and pendants, and while the hoard contains large numbers of sword fittings, there are no fittings for the straps on which the swords would have been hung. In particular, there are none of the triangular three- rivet gold buckles that are the most common gold finds in the graves of male Saxons. 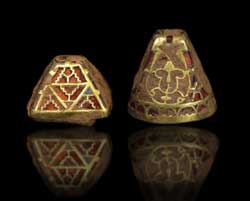 A large and impressive element of the hoard is the number of mounts of gold inlaid with delicate garnet cloisonnÃ©.   Though not yet identified with certainty, these are perhaps scabbard fittings. Equally enigmatic are five small gold snakes, which, again, are without parallel. As work progresses on this material, it is hoped that evidence will be found to suggest where the objects were made. Did they originate on the Continent, or in Kent or East Anglia? Another exciting prospect is that the objects were made locally and might therefore be the work of a previously unknown Mercian workshop. 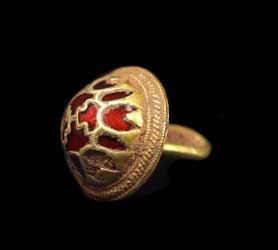 Kevin Leahy, National Advisor on Early Medieval Metalwork for the Portable Antiquities Scheme, has had the opportunity to study the hoard closely since it was found in July 2009, and has produced the initial report detailing the objects. According to Kevin: ‘Many of the objects are incredibly beautiful and the craftmanship is of the absolutely highest order. There are things in this hoard that we can’t yet identify, that we’ve never seen before. It will be fascinating to begin the process of identifying parallels for many of these unknowns.’