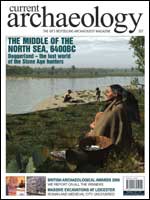 When we started the Developer Funded Archaeology Award, a biennial prize to celebrate the best of professional archaeology, we knew it would uncover some real archaeological scoops. But this year there have been 12 entries, and we have struggled to work out where to put it all.

So fonts have been changed, pages extended, and articles cut to squeeze it all in. This also means that some of our regulars such as News, Diary and Letters have been held over until next time. I’m sure you will agree that this was the right decision! So the bulk of the magazine is made up of some outstanding articles, which Neil Faulkner outlines overleaf, and where he explains just why developer funded archaeology is so important. The Developer Funded Archaeology Award is part of the British Archaeological Awards which took place in November, 2006. Part of this issue forms the official Awards Supplement, and here we give a run-down on the winners of the other prizes, including special features on the Custard Factory in Birmingham, where the event was hosted; the Biggar Archaeological Group, who were nominated and winners in several categories; and John Barnatt who won the Silver Trowel, the most prestigious of the Awards. The whole breadth of archaeology is covered, and I’m sure there will be certain awards and winners who will particularly interest you – whilst we can only provide brief glimpses of these, we hope to bring you in-depth features on the best ones in the coming issues. In the meantime, this issue is devoted to the Current Archaeology award, the cream of the work done by the professional units in the last two years. The winner not surprisingly is the Prittlewell Prince, the Anglo-Saxon prince excavated in the suburbs of Southend-on-Sea. We have already given a preliminary report of this in CA 190, but here we give the latest news of the excavations of the treasures that have taken place in the laboratory. Then we have a report on the biggest excavation currently taking place in this country, at Leicester where 10% of the Roman town is being redeveloped, and in Doggerland we look at how seismic survey in the North Sea is revealing the lie of the Mesolithic land before the North Sea was flooded. Then there is the surprise discovery of multi-period settlement at Cheviot Quarry, a medieval church at Ballumbie and post-medieval work at Bristol and Worcester. It is a fascinating look at British archaeology at work today.