North Argyll is a landscape dominated by the sea and, until the recent past, its inhabitants viewed it from a predominantly maritime perspective. Dr Colin Martin shares 30 years of research into this coastal environment.

It all really started by accident. For many years my wife Paula and I have worked as maritime archaeologists on 17th century shipwrecks in the Sound of Mull (CA 197).  We began exploring the local shoreline, finding it packed with interesting but often enigmatic features. On the assumption that these were already well-known and fully investigated, we logged onto CANMORE – Scotland’s online sites and monuments record – to find out more. To our surprise, we drew an almost total blank. So we decided to examine and record them ourselves, and perhaps follow a few investigative strands along the way.

Our first project was to survey marine boathouses along the Sound, for which we received a generous grant from the Society of Antiquaries of Scotland. These all dated to the first half of the 19th century, when carriage roads in the area were almost non-existent. Following the collapse of the clan system and the bankruptcy of many of the chiefs, large estates had been sold to incomers, often wealthy industrialists from the south. Since most communication with the outside world was only possible by sea, almost every estate had a boat and a boat-house. As a contemporary visitor put it ‘there was no house of any pretensions without its boat-house. It was as necessary as stables, and more so.’ 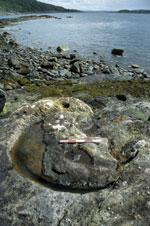 The boat-house at Driminin in Morvern is typical. It stands at the head of a natural creek, which has been enhanced by stone clearing and the building of a rough quay so the gentry could embark and disembark dry-shod. Its simple foursquare architecture is similar to contemporary estate buildings throughout Britain. The opposite is true of the adjacent boatman’s cottage, its rounded corners and cruck-supported roof being uniquely characteristic of vernacular Highland tradition. Such tensions between indigenous and ‘foreign’ are evident throughout this distinctively maritime landscape.

Much grander is the gothic boat-house on the large estate of Ardtornish, at the head of Loch Aline. Although this building (dated 1853) follows contemporary styles common in the south, with close-fitting ashlar masonry and ornate arches, our structural study shows that its builders did not fully understand the techniques involved in putting it together and have made some fundamental errors. We think they may have been local workers, struggling with an unfamiliar building style that changing times had foisted upon them.

As we explored the coastline, we were struck by the large number of stone-built fish-traps in remote   sheltered bays. There is no reference to them in the documentary record and it had been assumed that most are of medieval or even prehistoric date. We believe that many of these traps, known in principle since prehistory, date to a phase in the infamous Highland clearances of the 19th century when displaced communities were shifted to the coast in the expectation that they could subsist on the sea’s resources. Without the capital for boats, it would have been natural for them to reactivate an ancient fishing technique. The traps are therefore ‘prehistoric’ only in the sense that they generated no documentation, and now that those who built and used them are gone, the physical remains are the only record left. 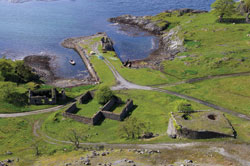 Our search for fish-traps brought us to the island of Lismore, where we found three more.   The island has a remarkable heritage of well-preserved industrial monuments too. Lismore is composed almost entirely of limestone (hence its legendary fertility – the name means ‘big garden’), and since the late 18th century, lime has been processed here. At this point we began to realise that the features we were surveying were not isolated and unrelated monuments, but elements of a landscape dominated by the sea. As our enthusiasm grew so did our ambitions, and we resolved to expand the area of study to encompass sites of all periods which relate to the region’s maritime past, mainly but not exclusively on the coast and foreshore. First, with a generous grant from the Royal Archaeological Institute and the help of the Royal Commission on the Ancient and Historical Monuments of Scotland, who allowed us to borrow their aircraft, we carried out an aerial reconnaissance of the coastline from Ardnamurchan Point to Loch Melfort in the south, identifying and photographing sites. Next, we began a programme (still in progress) of continuing the ground survey, using a combination of inflatable boat and 4×4 vehicle to cover areas beyond the reach of our home base. It is a simple, effective, and cheap way of having fabulous activity holidays (why shouldn’t archaeology be fun?).

Several strands of this complex landscape are beginning to come together. The area is rich in Mesolithic sites, revealed by extensive shell middens and occasional stone or bone tools.   Iron Age and early historic fortified sites are abundant in Argyll, but the strongly maritime focus of most of their settings has not been systematically examined.   Early ecclesiastical foundations, especially on Iona, also show a close affinity with the sea. In AD 563, St Columba came to Iona in a curragh large enough to carry 13 men. Others included the celebrated navigator St Brendan of Clonfert, who is believed to have founded the monastic settlement on the remote Garvellach Islands, with its distinctive beehive cells and adjacent landing-place.

In the late 8th century, the Vikings came, first to raid and then to settle. Viking craft are the forebears of the distinctive West Highland galley, which for several centuries dominated the western seaways, working in conjunction with a network of castles set on strategically-placed islands or headlands. Their end came with the introduction of armed sailing ships, which could not only out-gun the galleys but blitz the castles from seaward as well. This process began in the late 15th century, and its application over the next 250 years was a major factor in the ‘taming’ of the Highlands.

From the 18th century, various attempts were made to introduce industries to the Highlands, and some have left enduring monuments in the landscape.   As well as building stone, the area is rich in slate deposits, which were heavily exploited from the 18th century until the 1950s. Lying close to sea level, the slate quarries were prone to flooding, and several have become inundated. The most remarkable is on the tiny island of Belnahua, where it is reported that tools and equipment abandoned in the late 19th century still lie on the flooded quarry floor.

Over the next two years we plan to complete our survey and publish it as an illustrated gazetteer of sites supported by an analytical commentary.We have found th
at looking at a landscape from seawards, opens up entirely new perspectives on it, reminding us how important the maritime dimension has been to most people in the past. It is a theme that can be investigated wherever land meets sea, and we hope that others will develop similar projects elsewhere. But caution is advised: the sea and its margins can be dangerous, and sensible precautions rooted in good risk-assessment procedures are essential before setting out.

This is a condensed version of the article, which is published in full in Current Archaeology 219