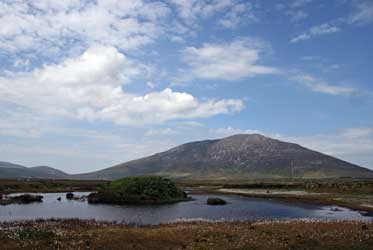 The recent work of the Achill Archaeological Field School examines the island’s archaeology from the Neolithic through to the dark days of
the Great Famine. Stuart Rathbone explains.
Achill Island is a remote spot on the north west coast of Ireland, separated from the mainland by a narrow sound. It is the largest of the Irish islands, and is divided into a mountainous western half and a low-lying eastern half. Today, the island is all but devoid of trees and, apart from the rocky coastline and mountain tops, the entire island is covered in deep blanket bog.

Over the last hundred years, Achill has become increasingly dependent on tourism, which, today, is virtually its only industry. The landscape is littered with abandoned cottages, fields and even entire villages dating from the 18th and 19th centuries — dramatic evidence of the farmers and fishermen who struggled to make a living from the sodden land and treacherous waters. 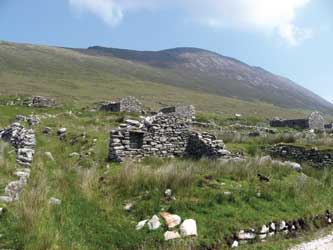 But there is another Achill Island, an island of dense forest and lush pasture, dramatic evidence of which is buried beneath the bog. The island was very different during the Neolithic and Early Bronze Ages, before the bogs began to take over from the Middle Bronze Age onwards. Prehistoric houses, tombs, fields, shell middens and preserved forests have all been identified on the island and slowly the story of the pre-bog island is coming to light. Over the last 20 years the staff and students of Achill Field School have been exploring the archaeology of two very different islands. 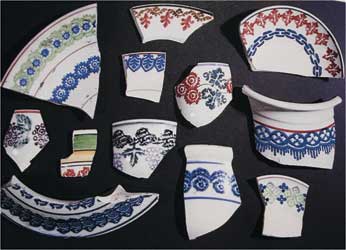 The Great Famine of 1840s, when so many people left Ireland and Scotland to settle in America, obviously had an effect on the residents of Achill. The classic account of the Highland clearances was written by John Prebble, a romantic Scottish partisan. This influential account, attributing most of the blame to ruthless   landlords, has been strongly criticised by other historians. So, what really happened?   This is a subject where archaeology is uniquely qualified to ask questions and to proffer answers.   In Scotland, the work on Barra and South Uist   has shown a story of population increase to an extent that islands could not support it. But what happened on Achill?

Details of the deserted village
Achill is dominated by the two great mountains of Slievemore and Croaghaun. Archaeologists have long taken an interest both in Achill’s fine chambered tombs and in the traces of ancient agriculture. In recent years, attention has been concentrated on a large abandoned village that was occupied in the 18th and 19th centuries. 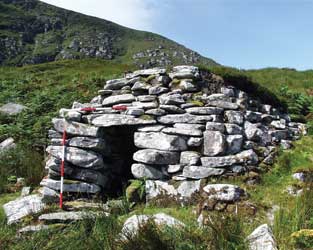 The deserted settlement lies on the foothills of Mount Slievemore, straddling the 70 metre contour, and consists of three distinct groups of houses linked by a pathway. These three groups of houses are referred to as Tuar, Tuar Riabhac and Faiche, although the names are toponyms that post-date the abandonment of the settlement and refer to different types of grazing to be found amongst the ruins. In total, the village stretches from east to west for about 1.5km. In the first edition Ordinance Survey of 1838, 137 houses were recorded, of which traces of 74 houses can still be made out. The buildings are of dry stone construction and the walls often survive up to their original height. Over 90 per cent of the houses are aligned north-south, at right angles to the street. A majority of the houses at Slievemore were one-roomed cabins called byre houses, where livestock were kept at one end during the winter, separated from the humans at the other end by a small channel. This type of dwelling was the prototype of the classic three-roomed house that can still be seen in most Achill villages. 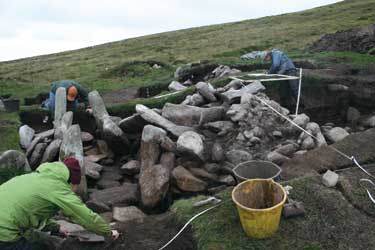 South of the middle village is a graveyard and a cillÃ¬n (a burial ground for the unbaptised, mainly children). Within the southern part of the graveyard are the barely visible remains of an early ecclesiastical site, possibly founded in the 7th century AD by St Coleman, who founded a major monastery on Clare Island just to the south of Achill. However, the village does not appear to have had a church. A holy well with his dedication is located in the northern part of the graveyard, although this has been relocated in recent times.