The Stonehenge story continues to evolve: a whole new chapter has just been added after the remarkable discovery this summer of a second bluestone circle, located at the point where the Avenue joins the River Avon. Chris Catling reports.

This second circle, dubbed ‘Bluestonehenge’, is made of stones brought from quarry sites far to the west — most, if not all, from the Preseli Hills of Carmarthenshire. Like the bluestone circle at Stonehenge, this movement of giant stones over a great distance represents an enormous investment of effort and resources, as does the later remodelling of Stonehenge and the construction of the sarsen trilithons – though the latter were built of more locally-sourced sarsens. Combined, these various and well-travelled stones are part of an architectural ensemble unique in the Neolithic archaeological record.
Equally resonant is the fact that the new stone circle slots neatly into place as a missing element in the ritual landscape, in which a number of natural features and 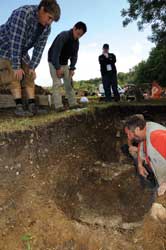 Avenue meets Avon
The excavations that uncovered Bluestonehenge this August and September are the latest in a seven-year fieldwork campaign, the aim of which was to investigate the precise nature of the junction of the Avon and the Stonehenge Avenue at West Amesbury. Working in a meadow south of West Amesbury House, Mike Parker Pearson and his colleagues excavated a long trench across the likely line of the Avenue, between the river and where it was last observed. About 1m below the modern turf level, the excavators found exactly what they were looking for: two parallel ditches, 18.1m apart, forming the outside edges of the Avenue. Interestingly, these Neolithic ditches also contained post holes, which would have once held upright posts, forming a small palisade on either side.
Pursuing the course of the Avenue even closer to the river, the team then returned to the henge ditch that they had found in the previous year’s excavation. When they opened up more of the riverbank site, the teams found that this henge, a ditched enclosure with an external bank, was even larger than they had originally thought — at least 25m in diameter. At its centre was a ring of pits, filled with clay and flint nodules used as packing stones: the settings for a stone circle, just under 10m in diameter. 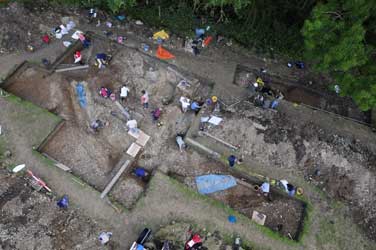 Henge and stone circle
This year, the team excavated a quarter of this circle and identified nine stone holes, whose curvature and spacing, at an average distance of 1.12m apart, suggested that the complete circle might have consisted of up to 25 stones. A clue as to the geology of the stones comes from the dimensions of the pits, which are too wide and too shallow for wooden posts, and too small to have held sarsens. Instead, the size and shape of the pits, the imprints left in the compacted chalk at the base of the pits and the sizes and shapes of the empty sockets all compare closely with the dimensions of the bluestones now in the inner oval at Stonehenge.

The precise chronology and interpretation of this new bluestone circle awaits the results of radiocarbon dates which will come from two antler picks that, by great good fortune, were found in sealed contexts relating to both the construction and demolition phases of this circle. Preliminary dating comes from two ‘chisel arrowheads’ found in the packing deposits; this type of arrowhead was current between 3400 BC and 2500 BC. 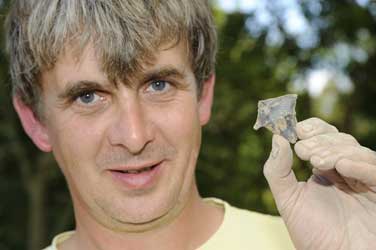 56 plus 24 makes 80
When showing visitors around the excavation in August 2009, Mike Parker Pearson said he hoped that the radiocarbon dates would confirm that the circle at West Amesbury was constructed around 3000 BC and is thus contemporary with the first bluestone circle (represented by the 56 Aubrey Holes) at Stonehenge. The dismantling phase could date to around 2200 BC, the date of the construction of the inner bluestone ring at Stonehenge, but it might be earlier, dating from around 2500 BC — the stage at which Stonehenge was remodelled, with the introduction of the 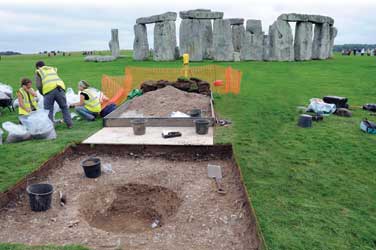 sandstone sarsen arches and trilithons that we now associate with Stonehenge. In this ensemble, the bluestones from the Aubrey Holes were removed and rearranged. But there are 80 bluestones in the remodelled Stonehenge and only 56 Aubrey Holes. ‘The assumption was that the builders of Stonehenge went back to Wales for more,’ says Mike, ‘but my hunch is that they just took them from our circle down the road’.
If this were the case, the henge at the West Amesbury site was then constructed after the dismantling of the bluestone circle, just as the bank of the Durrington Walls henge post-dates (and is built on top of) the Neolithic village. A date from the tip of a broken antler pick in the fill at the base of the West Amesbury ditch places the construction of the henge to within the period 2470—2280 BC. This henge had at least one entrance — on its eastern side, where the northern ditch terminal contained a special deposit of antlers, an antler pick, cattle bones and stone and flint tools, as well as a burnt organic container.
Endings or beginnings?
Again, this construction of a henge on the site of an earlier monument has led Mike Parker Pearson to propose a radical new interpretation of their meaning: could it be, he asks, that henges mark the closure of the active phase in the life of a monument, rather than, as we have tended to assume in the past, the creation of a monument for the start of ritual activity? Julian Thomas, who has been excavating the Greater Cursus, the long rectangular earthwork that runs for about 3km (1.8 miles) to the north of Stonehenge, says that this may also be true of other classes of monument: ‘for instance, the Greater Cursus may have enclosed (and sanctified) an already well-established route across the landscape. This challenges our normal way of thinking about building — we usually think that first we build so that we can do something inside a structure, but many prehistoric monuments may have been ways of commemorating, and terminating, actions that have already taken place.’ 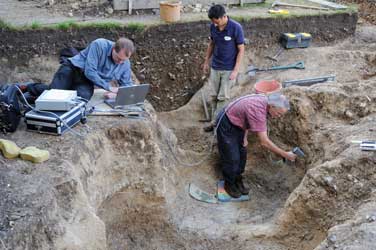 Such hypotheses are typical of the innovative thinking that has marked the work of the Stonehenge Riverside Project from the start. In the early years, the project concentrated on Durrington Walls, the huge henge that lies three kilometres north-east of Stonehenge. This bank and ditch structure, almost half a kilometre across, was found to have been constructed around a series of earlier timber circles, most notably the Southern Circle, a 40m-diameter monument of six concentric rings of timber posts. Connecting the Southern Circle to the River Avon, the team found a broad avenue with a flint and gravel surface, aligned on the midsummer solstice sunset