Archaeologists have excavated over 600 bodies from around the world, mysteriously buried face-down. Britain is the biggest hotspot — with more than 200 prone burials. What do they signify? Caroline Arcini of Sweden’s National Heritage Board has been investigating.

It was February 2005 and archaeologists were once again going to open Viking graves at VannhÃ¶g, a village in South Scania, Sweden. As a physical anthropologist, I was to be given the chance to carry out a comprehensive study of the human remains and what they could tell us. Looking at the records of earlier excavations in the 1950s, I noticed in a photo that one of the individuals was buried face down (prone), lying in the grave in a position like a frightened spider. Why?

Was this an exceptional case, or were there several buried in this position? Might an anthropological examination of the skeleton reveal special circumstances that could shed light on the cause of this type of burial?
But why did I react as if there was something wrong with this position? Why did I not accept this as one burial position among others? When I presented the case to people from different professions, the reaction was the same: buried face down did not appear to be culturally acceptable. Buried face upwards, on the side, or sitting was accepted, but face down was unthinkable. 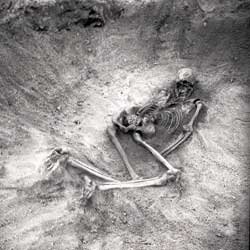 Was this a unique case, I wondered, or were there others?
Searching the literature, I found that this VannhÃ¶g Viking was far from unique. However, although prone burials have been observed in archaeological contexts for more than a hundred years, there have been very few attempts to synthesise the data. That is probably the reason archaeologists often still think that prone burials are very unusual.
Inspired by the American anthropologist Heizer, who recognised the need for a major survey as long ago as the 1940s, I began a systematic literature search to catalogue prone burials from all over the world. I soon found that the practice has been around for a very long time. The earliest known case of prone burial, 26,000 years ago, was found in the Czech Republic, while the most recent, from early 20th century Flanders, was a grave from the First World War. 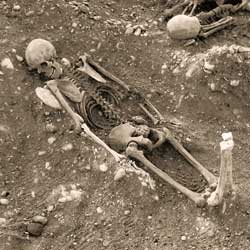 How common is the practice?
In many cases, the prone burials are in isolated graves, but in certain periods and places we find concentrations. For Europe, there is a cluster during the Roman period and up to the end of the Viking Age, from approximately AD 43 to AD 1000. In some places, nearly 15% of the graves contain people buried face down. In one of the Viking burial grounds on the island of Gotland, Sweden, around 13% of individuals were buried this way.
However, c.1000 BC in Mexico and in El Salvador, Central America, there are sites where the proportion of prone burials is as high as 90%. Likewise, on the island of Taiwan in Asia, there are burial places dated between c.1300 BC and AD 850 with the same high frequency as in Mexico.
Although this survey cannot claim to be fully comprehensive, it does show that prone burials have been discovered in at least 215 cemeteries throughout the world, and over 600 individuals are known to have been buried in this way.

What do prone burials have in common?
In places with several prone burials, they are often found together in groups within the cemetery. In many cases, they are concentrated towards the edge. The graves are often shallow. The majority are buried without a coffin, and in periods where grave goods are included in the funerary custom, it is common for those buried face down to have none. In other cases, the circumstances are ‘normal’ — except for being face down, the ‘prones’ are treated in the same way as everyone else.