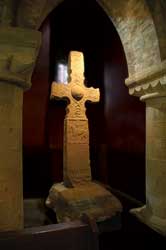 A 9th century palace, an enormous 3,000-year-old Neolithic earthworks and the origins of Scottish kingship: Gordon Noble and colleagues from the University of Glasgow investigate.
Few visitors notice the plaque in the village of Forteviot, Perthshire, Scotland, that records the death of Kenneth Mac Alpin, a 9th century king of Scotland. It refers to a passage in one of the few surviving early manuscripts from Scotland, The Chronicles of the Kings of Alba, that states in AD 858 Kenneth Mac Alpin ‘died finally of a tumour, on the Tuesday before the Ides of February [the 13th], in the palacium [palace] of Forteviot’. This makes Forteviot the earliest identified royal centre in Scotland.

The 9th century was a period of major social and political change in Scotland, with the unification of the eastern kingships of Pictland and the western kingships of the Scots into the new kingdom of Alba (the Gaelic name for Scotland) by AD 900. Forteviot is therefore a crucial location for understanding the complex processes that gave birth to one of the nations of Early Medieval Europe.

Forteviot also preserves a much deeper, and hidden, history. The fields around the modern village contain one of the largest concentrations of prehistoric ritual monuments hitherto identified in Britain. Almost nothing of these monuments, built of earth and timber, is visible on the surface, but aerial reconnaissance since the 1970s has recorded the tell-tale crop-marks. The most spectacular is a huge circular palisaded enclosure more than 250m in diameter just to the south of the modern village. Around and within this enclosure are a number of smaller henge monuments.

These structures predate the Early Medieval palace by some millennia, for they were constructed in the Later Neolithic period, some time around 3000-2200 BC. But, as we now know from excavation, in Kenneth Mac Alpin’s time, many of them were probably still visible. Did the palace of a 9th century king draw power from the 3,000-year-old earthwork remains of Neolithic henge monuments?

From prehistoric enclosure to 9th century palace
Our project, the Strathearn Environs and Royal Forteviot Project (SERF), aims to identify features associated with the royal palace, to investigate its nature and wider context, and to look at the long-term evolution of the landscape. Why did an Early Medieval power-base develop here? 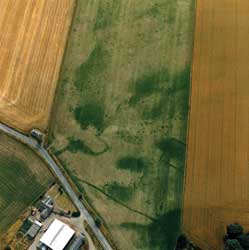 To answer that question, we need to locate the remains of the palace and associated structures, but also to explore the Neolithic monument complex. We want to find out to what degree, if at all, the prehistoric site influenced the siting of the palace. Looking further afield, we are interested in the evolution of settlement patterns and human use of the landscapes of the Strathearn river valley in which Forteviot sits.

In particular, what is the relationship between the defended hilltop enclosures of the earliest part of the Early Medieval period and lowland sites like Forteviot that were in use by the 9th century? There are around a dozen hillforts in our study area, and we have begun an ambitious project to characterise and date each of them.

Another arm of our research is the study of early Christianity in Strathearn. Nick Aitchison, author of a recent book on the site, has suggested that Early Medieval Forteviot may have been a monastery as well as a political centre. In the National Museum of Scotland there is a carved arch, probably of 9th century date, which may be a chancel arch from an early church at Forteviot.
There are also two spectacular 9th century carved crosses known from the vicinity. One remains intact: the Dupplin Cross, which formerly stood on the Gask Ridge overlooking Forteviot to the north, but now stands in a Dunning church nearby for conservation reasons. The other was the Invermay Cross, sadly destroyed in the 18th century, which stood to the south of Forteviot on the Dronachy Ridge, again overlooking Forteviot. These crosses are likely to have been boundary markers of the monastery and to have stood on routeways into the valley. Fragments of the Invermay Cross and additional sculptural fragments survive in Forteviot church. 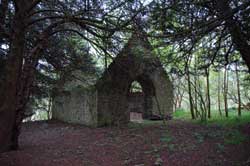 For the full article see CA 231