To get to the bottom of why, and how, the Ministry of Defence looks after archaeology on an active firing range, CA Editor Lisa Westcott spent some time with the people on the front line.

Peppered among the impact craters, rusted hulks of tanks and other training features of the Otterburn Ranges lies some of the most varied, plentiful and well-maintained archaeology in Britain.

Spending a day with military personnel in the ‘danger zone’ at the Otterburn Training Area is a fascinating exercise, which begins with a lesson in how to avoid nudging – and possibly detonating- the live ordnance that dots the moorland. What makes Otterburn so interesting is the great lengths to which the Ministry of Defence has gone to conserve, protect and make publicly accessible the archaeological wealth of this landscape.

The land here is absolutely stunning, remote and dramatic. Sweeping views across the Cheviots and into Scotland pass over territory that has been used by people since the earliest times; even so, at one point this spring it was possible to turn 360 degrees without seeing another human being. Though the major Roman thoroughfare of Dere Street crosses the north west of the Ranges, the historical inaccessibility of the terrain coupled with the peaty moorland soil has kept the area relatively undamaged. Paradoxically, the archaeology at Otterburn is less damaged by military interventions – such as live ammunition and pyrotechnics – than it would have been by centuries of cultivation. 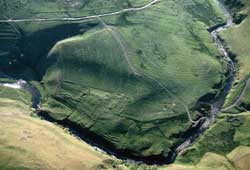 Wild and marginal land
Situated within the Northumberland National Park, the Otterburn Training Area covers 23,085 hectares of high moorland and boasts one of the greatest concentrations of multi-period archaeological and historical landscapes in the north of England. It is also part of an active military training facility that is the second largest live firing range in the United Kingdom. Comprising one-fifth of Northumberland National Park, Otterburn presented a unique challenge to the MOD: to provide training facilities that fulfil military needs, while taking into account the environmental and conservation issues of complex archaeological remains.
Since opening in 1911, hundreds of thousands of men and women have undertaken their military training on the Otterburn Ranges. Intensive use of land for such a long period of time has inevitably left its mark on the landscape: bunkers, observation posts and targets are situated alongside burial mounds, Roman camps and the remains of long-abandoned Medieval villages. Additionally, there are 31 tenanted farms located within the training area, which support over 100 people (and 20,000 sheep – also a significant factor in conservation and preservation of archaeology) engaged in extensive livestock farming.

People have been living and working the land on the Otterburn Training Area since prehistory; the evidence of their presence includes burial cairns, native British settlements and field systems, Roman roads and temporary camps, shielings and bastles, farmsteads and corn-drying kilns, limekilns and coal workings and a network of First World War practice trenches.

When Current Archaeology first covered the Otterburn Training Area (CA 64) there were 650 newly recorded archaeological sites including 16 scheduled ancient monuments.   Since then, the numbers have risen to over 803 recorded sites, including 75 scheduled monuments and five listed buildings. In order to understand these sites within their wider context, the MOD has identified six ‘Archaeological Landscape Areas’, which are in turn subdivided into over 80 ‘Highly Sensitive Areas’. Such is the importance attached to these sites, and also to those of natural environmental importance, that in addition to the full-time archaeologists on staff, unique among the UK’s Defence Estates the Otterburn Ranges have a full-time conservation officer, Chris Livsey, and a very active conservation group.
Visitors are encouraged to explore the Ranges, and can take advantage of public roads, bridleways, footpaths and interpretative signage to explore much of the estate. When there is active training under way, red flags will be clearly visible and the Controlled Access Area will be closed to the public.

Management
In order to meet the needs of the archaeological and historic environment as well as advise both military and civilian personnel who use the ranges, the Archaeology and Historic Environment Management Group (AHEMG) was established in 1995 at the Otterburn Training Area, with the aim of providing advice on the curation and management of the numerous archaeological sites. Members of the AHEMG represent a variety of partners, including the Northumberland National Park Authority, English Heritage, Defence Estates, Defence Training Estates and the Society of Antiquaries, Newcastle upon Tyne. 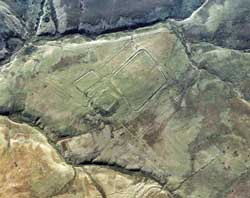 The AHEMG is tasked with monitoring the condition of all the sites on the training area. A comprehensive condition survey, commissioned in 2005, reported that 82% of sites were found to be in good condition, 16% were moderate and only 2% were found to be in a poor state of repair. These numbers are remarkable for a landscape that has been in such constant and hard use. The type of land management required by the army has generally discouraged the intensive orestry and farming regimes that have adversely affected archaeological sites and monuments elsewhere in rural Northumberland.
Decisions on which sites should be investigated are based on the state of the monument as it was identified in this condition survey.
Detailed earthwork surveys, for instance, have been undertaken on a number of sites such as Linbriggs, Aldenshiels and Windyhause (deserted Medieval villages), Bellshiel Roman Camp, the Beacon Cairn on the eastern boundary of the range and Thirlmoor Cairns on the west. This baseline information has been crucial in securing the implementation of long-term measures against threats to the archaeology such as bracken and scrub encroachment.