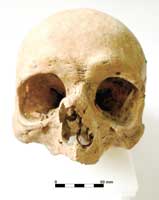 When large amounts of rare pottery, Venetian tea bowls, Cuban silver coins and pottery from the Caribbean began to turn up in 16th and 17th century cesspits in London’s Narrow Street, archaeologists were more than a little perplexed.

Ratcliff, Limehouse, Narrow Street — the names say it all: this was a poor part of London’s East End, cramped, industrial and rodent- infested (Ratcliff was originally Redcliff, but the locals who corrupted the name clearly felt that ‘rat’ was more appropriate). Narrow Street itself was scarcely more than an island of gravel reclaimed from the Thames by means of a river wall constructed some time before 1298. Floods were commonplace and the wall was frequently breached; it was finally strengthened and heightened in the late 16th century. Only then did the social status of the area begin to rise — John Stow’s Survey of London (1598) says of the area: ‘of late years shipwrights and (for the most part) other marine men have builded many large and strong houses for themselves, and smaller for saylers, from thence almost to Poplar’. 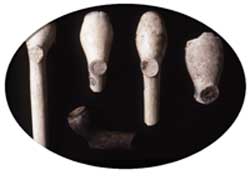 Shipbuilding was the dominant industry at Limehouse and Ratcliff from the 16th through to the 19th centuries. Associated trades, such as rope-making, also flourished here — Samuel Pepys records a visit to the area in his diary for 1664 when he placed a contract with a local producer to supply rope to the naval dockyard at Deptford. Narrow Street was part of a hard-working area of wharves and shipyards but with connections to the newly developing world of trade that was opening up in the wake of the 16th century ‘voyages of discovery’ to the Americas, Africa and Asia.

The team of archaeologists investigating the area  expected to find the material remains of an industrial suburb. Instead, what began to emerge from the cesspits in the yards behind the remains of timber houses was an exotic assemblage of pottery, glass and small finds, the like of which is not known even from the grand ‘prodigy houses’ of the era. In one pit — context 849 — locally produced ceramics accounted for 40 % of the assemblage: the rest consisted of pieces from vessels made in France (12%), Germany (15 %), the Low Countries (18 %), Portugal (9 %), Italy (3 %) and Spain (3%). Pit after pit produced similar statistics, and these were not utilitarian vessels. Though there were some functional olive jars and wine costrells among the assemblage, most of the sherds were of decorative maiolica, faience, slipware and lustre ware — the most costly and desirable products of their age. 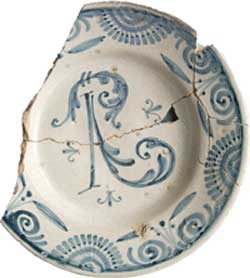