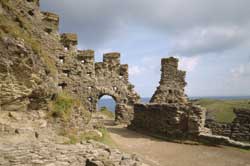 Medieval historian Geoffrey of Monmouth claimed Arthur was conceived at Tintagel, a myth that has helped make it one of the most visited archaeological sites in Britain. What do we really know about this iconic site? A major excavation project, begun in the 1990s, has just published its conclusions.

Tintagel looks the part. It is a craggy mound of splintered grey rock and rough grasses endlessly pounded by Atlantic waves. The site is dominated by the remains of a castle built in the 13th century by Richard, Duke of Cornwall and these ruins draw the attention of visitors, who believe that it must be Arthur’s castle. There is little else to be seen walking out over the mound.

The true greatness of Tintagel is represented not by its medieval castle, but by the reconstructed slate dwarf-walls that mark the site of modest rectangular buildings excavated on the eastern terraces of the island. It was here that Raleigh Radford uncovered the building foundations and scatters of imported pottery that identified Tintagel as a major site of the 5th-7th centuries AD. Radford had worked at Tintagel in the 1930s and again in the 1950s. He was struck by the apparent pattern of scattered small-scale structures, built on terraces, distributed across the mound. Who would choose to live in such a place, perched on crags, lashed by wind and rain? Especially when they were plugged into an international trading system that brought them quality ceramics from as far away as ancient Byzantium. 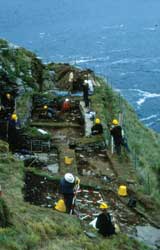 The austere monastic orders of the early Dark Ages might choose such a place, and the Christian Church might be the global network that was moving goods from the Eastern Mediterranean to Western Britain. After all, some of the potsherds bore incontrovertibly Christian symbols. The wider distribution of these types of imported pots (known, rather unimaginitvely, as A-ware and B-ware) matched that of early Christian inscriptions.

Commissioned by English Heritage to carry out fresh investigations on the island in an attempt to resolve the debate about the nature of early Dark Age Tintagel, a team of archaeologists from Glasgow University conducted a series of short survey and excavation seasons between 1990 and 1999. They re-evaluated Radford’s work — both on site and in the archives — and the project has finally concluded with the publication of a grand monograph that summarises the results. Our picture of Tintagel is now radically different. It has come closer, in the imagining, to a place where a king might have been sired. Instead of a little community of Celtic monks, Tintagel may have been one of Western Britain’s premier centres of Dark Age political and military power.