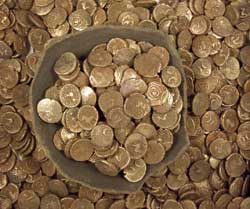 A stunning hoard of Iron Age gold coins was found in Suffolk in spring 2008, and has turned out to be one of the largest and most spectacular finds of its kind in Britain. Unusually, for a find of this size, almost all the coins were found actually in situ at the base of the earthenware pot in which they had been deposited 2,000 years ago. News of the find has been deliberately withheld in order to complete the investigation – until now.

The hoard was found by a metal detectorist in a field near Wickham Market that had been left as pastureland for nearly 30 years. After coming across a handful of coins just beneath the surface, he dug down further to discover the bulk of the treasure still lying in the base of the pot, just 15cm to 20cm below the surface. The lid had been broken by a ploughshare at some time in the past, resulting in some of the coins being scattered across an area of five to ten metres. In all, he collected 783 coins.

After bringing them home and washing them, he handed them over to the landowner, who immediately contacted Suffolk County Council Archaeological Service. In a jointly-funded project between Suffolk County Council and the British Museum, archaeologists returned to the field in October to excavate the site. The two-day dig revealed that the hoard had been deposited within a ditched enclosure of Late Iron Age date.  They  subsequently found another 42 gold coins, bringing the total number to 825. Two intersecting ditches were partially excavated; pottery sherds found in the excavated trenches suggest one was open in the Late Iron Age and the other was dug and later filled in during the Roman period.

The full article can be read in Current Archaeology 227