Archaeologists in Herefordshire have uncovered a hitherto unknown type of monument – a serpentine path at least 75m in length, made up of fire-cracked pebbles – on a sloping hillside between the ridge at Dinedor, with its Iron Age fort, and the River Wye at Rotherwas, two miles southeast of the city of Hereford.

The monument was found by Worcestershire Historic Environment and Archaeology Service working in partnership with Herefordshire County Council’s Archaeology Service during the excavation of the route of a new access road leading to the Rotherwas industrial estate.

Possibly dating from the late Neolithic, it differs from the relatively common burnt mounds of the Middle Bronze Age in several important respects: instead of being heaped, the fractured stones are carefully laid to form a near continuous single-stone depth surface, with very few jagged edges of the broken stones facing upwards, and the path lacks the burnt soil and charcoal that is typically found in large quantities within the matrix of a burnt mound. Instead, the path incorporates pieces of opaque white quartz, and is flanked by several large post pits, where soil discolouration around the perimeter of the pit suggests that the timber was burnt in situ. Keith Ray, County Archaeologist for Hertfordshire, described the monument on Radio 4’s ‘Today’ programme as ‘a structure that writhes three-dimensionally, with at least four distinct curves, across the landscape’. He went on to say: ‘This is an exciting find, not just for Herefordshire and the UK, but apparently, so far, it is unique in Europe. It has international significance.’ 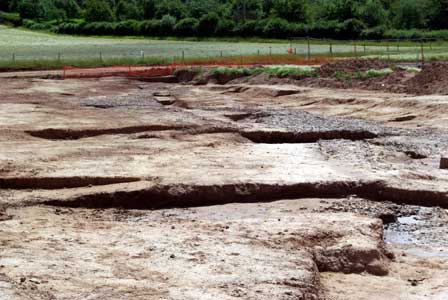 A number of leading British prehistorians have visited the site, whose full extent has yet to be established (it continues into the baulks at both ends of the excavated area). No exact parallels have yet been cited, though the use of broken stone to pave short causeways is known elsewhere at both Neolithic and Bronze Age sites in Europe.

The sinuous character of the structure led the media to call it the Rotherwas Ribbon’, or ‘Serpent’, though it might have been intended to evoke the transformative powers of water and fire, themes that are explored in Gordon Noble’s Neolithic Scotland: Timber, Stone, Earth and Fire (Edinburgh University Press 2006) and that are also pertinent to current thinking about the Stonehenge landscape (see our feature in this issue).

Samples have been taken from the site for carbon 14 dating, but it will be sometime before the results of this programme are available. A date earlier than 2000 BC has been tentatively assigned on the basis of finds from the surface of the monument, which Keith Ray says, ‘considerably expands the known repertoire of monumentality in Neolithic/Early Bronze Age Europe and will provoke a considerable re-think of the erstwhile widely supposed "peripheral’" character of Neolithic and Bronze Age activity in Herefordshire’.