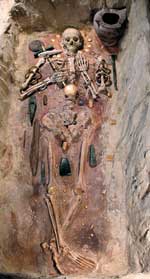 In the second part of our mini-series based on Barry Cunliffe’s new book Europe between the Oceans, our focus is the period c.2800-140 BC. We see the rise and fall of great civilisations, and a looming clash between a Mediterranean-based superpower and the Celtic peoples of Iron Age Europe. Once again, it is the movement of people, goods, and ideas that is central to Cunliffe’s vision of Europe’s distinctive history.

Homer, in The Odyssey, describes an incident in which Odysseus is mocked for his travel-worn appearance. He does not look, the observer says, like a warrior or an athlete, but more like ‘some captain of a merchant crew, who spends his life on a hulking tramp, worrying about his outward freight, or keeping a sharp eye on the cargo when he comes home with his extortionate profits’.

The world represented in Homer’s poems spanned the period from the collapse of Mycenaean civilisation in c.1250-1150 BC to the beginning of the Archaic Age in c.750 BC. The sea dominates this world. His stories abound with accounts of seaborne trade, raiding, and piracy. His heroes are warriors who sail the seas in search of booty and honour. The Trojan War is a massive amphibious operation.

Minoans, Mycenaeans, and Sea Peoples
Select communities of the Eastern Mediterranean had been growing fat on seaborne trade for 2,000 years. Long boats powered by many rowers had been used for inter-island journeys in the Cyclades from around 3000 BC. The phase designated ‘Troy II’ at that most famous of Aegean archaeological sites was a defended citadel guarding a harbour at the entrance to the Dardanelles dating to the period c.2700-2200 BC. What the Greeks called the ‘Thalassocracy (Sea-power) of Minos’ — with its sprawling, stone-built, frescoed palaces, and store-rooms packed with giant pithoi — rose to dominance in c.1950-1450 on the basis of Crete’s central location and the islanders’ revolutionary design of deep-hulled, high-capacity, sail-powered cargo ships.

The Mycenaeans who displaced them around 1450 BC were also traders. The Late Bronze Age Greeks flourished at the interface between high-consumption Eastern civilisations and a European hinterland rich in metals, slaves, horses, furs, and amber. The greatest of the Mycenaean fortress-palaces — Mycenae itself — stood astride the narrow crossing that linked the Adriatic, via the Gulf of Corinth, with the Aegean, via the Gulf of Argos.