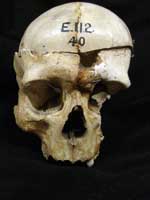 The perception that much of prehistory was relatively peaceful is changing. New research has identified evidence of violent assault in the Neolithic. What does this tell us about Stone Age life as a whole? Forensic archaeologist Martin Smith explains.
Whilst many Neolithic burials have been excavated during the last 150 years, they have received only limited study. Modern analysis of these remains by osteo-archaeologists is revealing shocking evidence for violent assaults involving clubs, axes, and arrowshot about 5,500 years ago.

Recent years have seen growing interest in conflict archaeology. Warfare has gone from being a subject rarely mentioned by archaeologists to one that is widely debated. Current   world events may have something to do with this, but it is also linked to advances in our ability to recognise evidence of violence, and a drive towards new theoretical approaches for making sense of it.

Most research of this kind has usually been concerned with more recent periods, but lately consideration is also being given to prehistory. In particular, we now have a growing body of evidence for aggression between groups and individuals during the Neolithic, most of which comes in the form of skeletal injuries. The fact that acts of violence sometimes occurred in this period now seems indisputable. However, assessing what this tells us about Neolithic life as a whole is harder.

Old wounds: new evidence
Many injuries to the skeleton are difficult to interpret, as there may be a number of ways in which a particular injury could be incurred. Fractured ribs, for example, can be sustained in various ways, mostly through accidents such as falls. It is generally impossible to be specific about the origin of these kinds of fractures in archaeological bone.
Some types of injury, however, may be more consistent with a particular cause. Fractures of the skull are a good example. Head injuries inflicted with weapons often produce patterns of fracture that are more easily recognised as such than wounds to other parts of the skeleton. Improved understanding of the properties of bone fracture has led to our recognition of a growing number of Neolithic head injuries consistent with violence, many of which might previously have been interpreted as damage after burial.
Such signs of violent assault are apparent throughout much of Europe, and not least in Britain. These include a number of healed head injuries apparently inflicted with blunt, club-like implements, as well as unhealed fractures inflicted very close to (if not actually at) the time of death. The latter include a mixture of sharp-force and blunt-force trauma, possibly inflicted with stone axes. 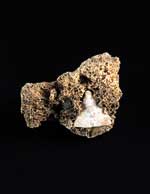 Then there are projectile wounds. This category is particularly unequivocal where fragments of arrowheads remain embedded in bone, although recent experimental research has revealed that it is sometimes possible to recognise such injuries even where the ‘murder weapon’ is no longer present. In a recent research project examining evidence of cranial trauma, Mick Wysocki, Senior Lecturer in Forensic Archaeology and Anthropology at the University of Central Lancashire, and Rick Schulting, Lecturer in Scientific and Prehistoric Archaeology from Oxford University, produced a conservative estimate (based on the view that some examples might be misdiagnosed) that 26 out of 350 crania examined (7.4%) displayed traumatic injuries.