Last summer, digging through 3.5m of riverside mud at Greenwich in London, archaeologists uncovered the remains of a huge timber watermill of the 12th century. The wheel, part of which survived, would have been more than 5m across. We report on an extraordinary example of Medieval engineering for industrial-scale production.

The remains were a long way down. Contractors, Erith Ltd, were preparing the ground for a new residential development at Greenwich Wharf, and needed to dig deep through layers of waterlogged silt, clay, and peat to build a firm foundation. Museum of London archaeologists were on hand, to monitor the work with the power to intervene and investigate if something turned up. They were especially concerned about the peat at the lowest level: this might contain preserved prehistoric wood. Instead, the big discovery was sitting within and on top of the peat on a thick bed of chalk rubble.

Two things were immediately apparent: first, the preservation was superb; and second, the timbers of whatever this structure was were absolutely massive. There was soon a team of eight people on site, and it took around 12 weeks in the late summer of 2008 to expose, record, and lift the remains of what we now know was an early Medieval tide mill. 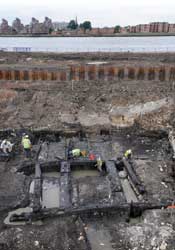 The mill measured over 10m by 10m in plan, and was constructed largely from prepared oak beams, the thickest of them 0.6m by 0.3m across. The lower superstructure of the headrace, the wheel-pit, and part of the tailrace were represented. The constructional details of these base plates were well preserved and, in many cases, the joint detail of each timber has also survived. It appears the upper superstructure had been carefully removed for reuse during the Medieval period as there was no evidence of burning or broken joints, with little damage to the timbers left to archaeology.
Intricate details of the Medieval carpentry could be seen. A central cofferdam wall of oak piles had been constructed, to one side of which was attached a series of oak boards, each individually numbered by the millwrights during assembly. Tusk-and-tenon joints had been used to create a cradle, pinning the foundation piles to the base-plates of the mill superstructure. The range of carpenters’ marks and the variety of well-cut joints gave the impression of a gigantic kit of prefabricated and numbered timbers brought to the site and assembled in situ. Yet, according to London timber specialist Damian Goodburn, there was not a single piece of sawn timber in the entire structure: everything had been cut by axe. 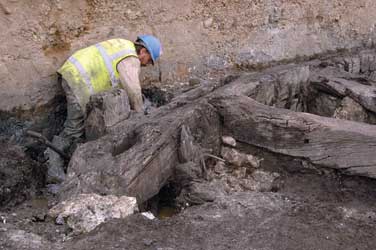 Massive oak piles and base-plates had been necessary to anchor the superstructure on the wet ground at the river’s edge, with the piles forming a cofferdam against shifting sediments: for the working parts were heavyweight, and the rotations of the mill’s water-powered grinding mechanism would have imposed huge strains on the timber framework and its moorings. This was Medieval woodworking on a monumental scale.

The most spectacular discovery was a large section of the waterwheel, complete with paddles or ‘floats’, each one held in place by wooden starts, or pegs, driven through holes in the wheel and jammed in place with wedges. There were also the remains of spokes and clasps, used to reinforce the wheel. Ancient technology expert Bob Spain has estimated that the complete wheel must have measured 5.1m in diameter and comprised 12 radial spokes and 60 paddles. The paddles seemed designed for easy replacement — they probably broke quite often — and this quick system of repair suggests the mill was used as a commercial, rather than a private, concern. Remains of a wattle hurdle were found in the headrace, presumably intended to catch large, heavy objects liable to damage the wheel. 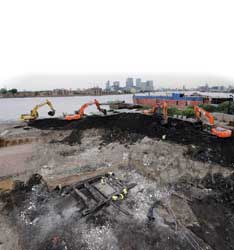 The wheel fragment was found inside a long dugout timber trough, which had a large flat piece of sloped timber for channeling water down from the headrace onto the paddles. The trough, exceptionally well-preserved and tightly secured in position, was 6m long; it had to be cut in two during excavation to fit inside the York Archaeological Trust’s freeze-dryer, pending conservation.

Why did they leave the wheel when they dismantled the superstructure? A possibility is that it broke in situ. The wheel seems to have been strengthened at some point with timber clasps, perhaps to keep it true, perhaps to prevent it breaking, and this may be evidence of its fragility. Whatever the reason for its survival, it is a nationally unique discovery, being the only example of an Early Medieval waterwheel known.

The full article is published in Current Archaeology 236.