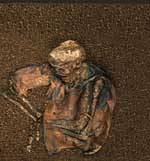 In the summer of 1984, archaeologists recovered the well-preserved remains of a 2,000-year-old body from a bog in Cheshire. Years later, the file is still open on this ancient whodunnit.   Features Editor Neil Faulkner asks: is the traditional interpretation of ritual killing correct?
It was on 1 August 1984 that a worker at a peat-cutting company on the edge of Lindow Moss in Cheshire pulled what looked like a lump of wood off the conveyor-belt. When it hit the ground, the peat fell away to reveal a human leg.

County archaeologist Rick Turner was shown the place from which the peat had been cut the following day. He noticed a flap of skin protruding from the section. By 6 August, an archaeological team was on site. They lifted an entire block of peat by cutting down on three sides and sliding a sheet of plywood beneath. Taken first to the mortuary at Macclesfield District General Hospital — the local police were investigating a murder in the area — it was quickly established by radiocarbon dating that the body was at least 1,000 years old. Lindow Man promptly passed into the care of the British Museum. 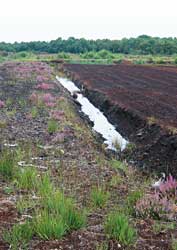 In late September, using a combination of fingers, water jets, and various wooden and plastic tools, the conservators picked at the peat, working back steadily from the flap of skin already exposed, to reveal the body within — work complicated by the need to keep the remains below 4 ºC to prevent decay. Lindow Man turned out to comprise the head, arms, and upper torso of an adult man of about 25 years. The details of his hair (generally short but long at the nape), his beard (clipped with shears), and his furrowed brow became headline news. So, too, did the grim evidence of his death.

Bodies in the bog
Lind 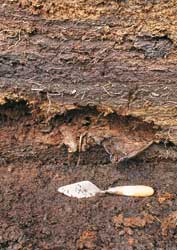 ow Man was not alone. In May 1983, the skull of a woman aged between 30 and 50 had been recovered from Lindow Moss. Her left eyeball was still in place, along with some hair. The discovery prompted a local murder suspect to confess to having killed his wife — his house backed onto Lindow Moss — but a radiocarbon date later revealed that the skull was 1,800 years old! In February 1987, more body parts turned up on the conveyor belt, and further investigation eventually recovered some 70 separate pieces, forming the back of an adult male, a hand, and a leg.

Finally, in June and September 1988, parts of the buttocks, left leg, and right thigh of an adult male were recovered. These pieces were found only 15m from where Lindow Man had lain, so they are probably missing pieces of his body. Future DNA analysis may prove this one way or the other. 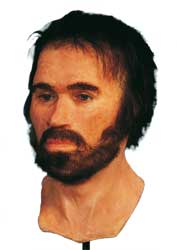 Bog bodies have been found in many parts of north-western Europe over the last 150 years. It has been estimated that as many as 2,000 altogether may have been uncovered in Britain, Ireland, Denmark, Holland, north-west Germany, and elsewhere. Some have been as old as 6,000 years, some only a few hundred, but most cluster in the period c.500 BC to AD 100. Many share some of the distinctive and peculiar characteristics of Lindow Man. Many, in consequence, are thought to represent ritual killings in the context of some form of Celtic cult.