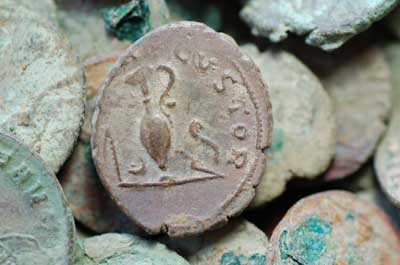 The Portable Antiquities Scheme has today released news of the Frome Hoard, a cache of 52,503 Roman coins dating to the 3rd century, found by metal detectorist Dave Crisp near Frome in Somerset in 2010. Tony Williams, Coroner for Somerset, will hold an inquest today to determine whether the coins can be declared treasure, in which case they can be purchased at market value, with the detectorist and the landowner claiming part of the reward, as was the arrangement for Terry Herbert and Fred Johnson after the finding of the Staffordshire Hoard last year.

“Because Mr Crisp resisted the temptation to dig up the coins it has allowed archaeologists from Somerset County Council to carefully excavate the pot and its contents, ensuring important evidence about the circumstances of its burial was preserved”.

The coins were contained in a ceramic pot and date to the period AD 253 to 293. Most of the coins are made from debased silver or bronze and weigh around 160kg. The pot containing the coins was broken and the coins were removed from the pot in 12 layers, with each layer containing up to 16 separate bags of coins, a total of 67 separate types. Of the total amount of coins found, 44,245 were identifiable with the remainder classed as illegible. The discovery is the largest coin hoard found in Britain and the second largest treasure hoard.

Because of the weight of the coins and the fragility of the pot in which they were buried, the pot must have been buried in the ground before the coins were tipped into them. This suggests that this hoard is unlikely to have been buried because its owner (or owners) were concerned about the threat of invasion and, wishing to find a safe place to store their wealth, intended to come back and recover it later when the times were more peaceful. If that had been their intention, then they would have buried their coins in smaller containers which would have been easier to recover. The only way anyone could have recovered this hoard would have been by breaking the pot and scooping the coins out of it, which would have been awkward. It is thought therefore most likely that the person or persons who buried this hoard entrusted it to the earth without intending to come back and recover it later. Perhaps it was the offering of an agricultural community for a good harvest or favourable weather.

This is a find of great national importance and we are determined to raise the sum to acquire the hoard for public benefit. Hopefully it will be able to go on display in the new Museum of Somerset when it re-opens in 2011”.

Ed Vaizey, Minister for Culture at the Department for Culture, Media and Sport said:

“Once again this demonstrates how important the Treasure Act and the Portable Antiquities Scheme are in helping to preserve our heritage. I congratulate Mr Crisp on his prompt reporting of his find and especially in allowing archaeologists to excavate the hoard. If the hoard is declared Treasure, Somerset County Council Heritage Service will have the opportunity to acquire it at its full market value, as determined by an independent committee and that reward is shared by Mr Crisp and the owner of the land where the find was made. That way everyone is a winner.”

In the meantime the coins have been washed and stabilised by a team of conservators at the British Museum, led by Pippa Pearce, and they are being studied by Roger Bland and the Portable Antiquities Scheme’s Roman coins specialist, Sam Moorhead.

A selection of coins from the hoard is on display in Gallery 68 at the British Museum until mid-August. 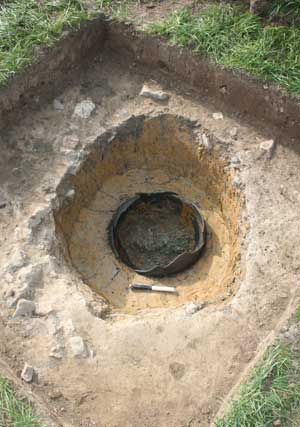 Archaeologists believe the hoard will rewrite the history books, by shedding light on the economic crisis and coalition government in the 3rd century. The hoard contains over 760 coins of Carausius, who ruled Britain independently from AD 286 to AD 293, and was the first Roman emperor to strike coins in Britain. This is the largest group of Carausius’ coins ever found, including five rare examples of his silver denarii, the only coins of their type being struck anywhere in the Roman Empire at the time.

The coins span 40 years from AD 253 to 293 and the great majority are of the denomination known as ‘radiates’; in total, the hoard is the equivalent of about four years’ pay for a legionary soldier. Each of the 67 groups of coins was washed and sorted separately; as a result it was discovered that the great majority (85 per cent) of the coins of Carausius, the latest coins in the hoard, were contained within a single layer (Context 16). This gives fascinating insight into how the coins were placed in the pot, as a group of coins of Carausius must have been tipped into the pot separately from the rest of the coins.

Roger Bland, Head of Portable Antiquities and Treasure at the British Museum said:

“This hoard, which is one of the largest ever found in Britain, has a huge amount to tell about the coinage and history of the period as we study over the next two years. The late 3rd century AD was a time when Britain suffered barbarian invasions, economic crises and civil wars. Roman rule was finally stabilised when the Emperor Diocletian formed a coalition with the Emperor Maximian, which lasted 20 years. This defeated the separatist rÃ©gime which had been established in Britain by Carausius. This find presents us with an opportunity to put Carausius on the map. School children across the country have been studying Roman Britain for decades, but are never taught about Carausius — our lost British emperor”.

About 570 coin hoards of this period are known from Britain, a greater concentration than from any other part of the Roman Empire. The largest hoard ever found in Britain contained 54,912 coins dating from AD 180 to 274 and was found in two containers at Cunetio, near Mildenhall in Wiltshire; another hoard of 47,912 coins of AD 251-290 was found at Normanby in Lincolnshire in 1983. 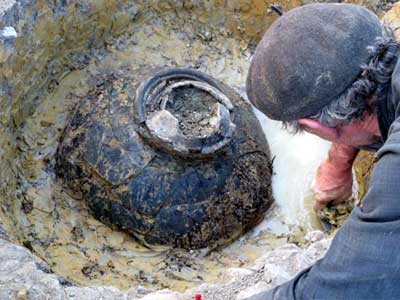