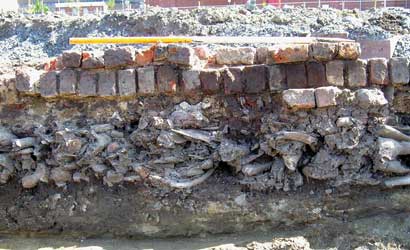 A neglected and deprived part of Belfast has been excavated by archaeologists to reveal its transformation from 17th century farmland to squalid, overcrowded 19th century urban slums.In 1853, the Rev. W M O’Hanlon, Congregationalist minister for Upper Donegall Street Church, published a series of letters in the Northern Whig, a Belfast newspaper, detailing the filth and depravity in which the poorest people in the city lived.

How few of the churchgoing, orderly, affluent members of the community have ever visited, or perhaps even heard of, such places as Brady’s Row, Green Court, Henry Square, Johnny’s Entry, Poplar Court, Morrow’s Entry, Lynas Court, William’s Lane, Patterson Place, Dickeys Entry — mostly crowded with human beings in the lowest stage of degradation! To attempt fully to gauge this immense mass of human wretchedness and vice, so as to give any adequate idea of its contents, would demand weeks.

The areas he visited and wrote of were those bounded by modern Donegall, Academy, Great Patrick, Corporation, and Waring Streets. In the summer of 2007, a team of archaeologists from Northern Archaeological Consultancy got the chance to excavate a large area behind St Anne’s Cathedral in the heart of this formerly deprived area. We were excavating at the request of W H Stephens in advance of the St. Anne’s Square retail and residential development. The excavation area was roughly the size of a football pitch, some 110m long by 70m wide. The archaeology uncovered encompassed Belfast’s history from the early 17th century, through its 18th century expansion, and on to the major industrialisation of the 19th and early 20th centuries.

A growing industrial city
The earliest features on the site were a number of early 17th century drainage ditches and ponds. At this time, the site had lain outside the 17th century defences of the city, so it is likely that these features were used to drain the swampy land around Belfast so that it could be used for farming. As the town expanded beyond its defences, the ditches and ponds were backfilled, and some small-scale industrial activities, including tanning, took place on the site. Later, the area was used for housing, and by the early 19th century it was densely populated with a ring of large streets enclosing many small closes, entries, and alleys.
By the end of the 19th century, the industrial revolution was in full swing in Belfast, and the need for factory and office space in the centre of the city caused many of the houses to be demolished and replaced by several large warehouses. No further building work was undertaken after the end of the 19th century, and over the intervening years the area slowly became dilapidated, with buildings and houses demolished and not replaced. By the end of the 20th century, the area was no more than a car park.

The archaeology of 19th century slums
The surviving remains of the 19th century slums were represented by parts of two cobbled streets, a large paved area, and numerous house foundations and their associated drains. Historical evidence shows that these structures first appeared around 1815. The surviving roads were those of Henry Square and a small section of Brunswick Lane, while the housing was part of a terraced row on Edward Street, part of a terraced row on Williams Lane, and small sections of a terraced row on Talbot Street, Green Street, and Grattan Street. The large paved area was part of a building at the south-west corner of Henry Square.
The walls of the houses and the drains were constructed of red brick. The foundations for most of the houses were of stone, though in one area the walls were built on a foundation of animal horn and bone, principally of horses and cows. The use of this material was an unusual discovery. The only comparable Irish site to date is in Carrickfergus, where a short kerb made of animal horn was excavated, formed of 50-60 horn-cores and horn-core fragments piled approximately 10cm high. This kerb was assumed to be an 18th or early 19th century feature, probably used as edging for an urban garden, with the material derived from a nearby tannery. There is also evidence from English sites of bone being used to infill drains in the 17th and 18th centuries. The implication is that bone is good drainage material, and perhaps it was used for house foundations at St Anne’s because of the water-logged ground. Or maybe it was just cheap, and evidence of the low status of the district.

For more information, the full article is published in CA 229