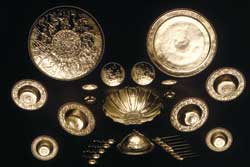 The British Museum’s Richard Hobbs has been playing detective — investigating the 60-year-old mystery surrounding the spectacular Mildenhall Treasure and here he reports on the outcome of his enquiries.

One of the most celebrated hoards ever recovered from British soil, the Mildenhall Treasure consists of 34 pieces of exquisitely decorated Roman silver tableware of the 4th century AD and has remained on almost permanent display at the British Museum ever since it was first reclaimed from the house of one Sydney Ford.

Dear Dr Fawcett, I reported the find to the police at Mildenhall on the 21st, and they promptly came along and pinched the lot.

So wrote an aggrieved Sydney Ford, whose letter was just the beginning of an extraordinary story of subterfuge and supposed conspiracies that surround this truly enigmatic discovery.

Sydney Ford did not find the treasure himself — it was actually discovered by an employee of his, tractor driver Gordon Butcher, whilst ploughing a field in the village of West Row on the edge of the Fens, almost certainly in January 1942. Just to complicate matters, Butcher was not ploughing a field belonging to Ford but to another local man, Fred Rolfe. Butcher had been asked to plough deeper than usual because the field was for planting sugar beet, and after the plough had struck the find and Butcher suspected that he had discovered something unusual, he sought the help of his boss. A snow storm swirled around the two middle-aged men as they dragged each piece out of the peaty soil, but at the end of the day it was Ford who took the hoard home — not Butcher, the original finder. In Roald Dahl’s story The Mildenhall Treasure — based on an interview with Butcher — the celebrated children’s writer conjures up this critical exchange between the two men:

Ford gathered the top of the sack in his hands, then bent down and picked up the large plate. He checked, stood up again, and holding the sack in his hands, looking to one side, he said, ‘Well, Gordon, I don’t suppose you want any of this old stuff.’
No answer.
‘I don’t suppose you’d mind if I took it along home. You know I’m sort of interested in old stuff like this.’
Gordon Butcher’s blue-white face turned slowly towards the bulging sack.
‘Of course,’ he said very quietly. ‘You take ‘em along, Mr Ford.’

Dahl later wrote, ‘The fact that my story may not be at all accurate doesn’t worry me in the least’, but we do know for certain that Ford took the entire hoard home and that Butcher played no further part until the war was over. (Suggestions that Butcher was ‘paid off’ have never been substantiated.) 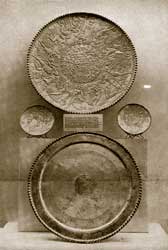 Ford, on the other hand, was now a busy man. He spent the war years scrubbing away at the pieces of silver, starting with the Great Dish, gradually removing the black crust of oxidation, employing cleaning techniques which would no doubt give modern conservators heart palpitations.

And that is where the hoard might still be sat if it had not been for Dr Fawcett, to whom Ford’s indignant letter was addressed. In my view, Fawcett is the true unsung hero of the whole story — without him, we would probably know nothing of the treasure’s origins, and perhaps nothing of its very existence. Hugh Fawcett was a Buckinghamshire GP who had an avid thirst for antiquities — lithics were his particular passion. Basil Jarman, another employee of Ford, later said: ‘Ford’s love of antiquities was well known in the area. Anyone who found anything would “take it down the lane” to show Ford, probably in the hope he would buy it.’ So Fawcett had struck up a relationship with Ford and visited Suffolk sporadically over the years to see what Ford had to offer.
During Easter 1946, Ford showed Fawcett some of the pieces of the Mildenhall Treasure, insisting that they were made of pewter. Fawcett immediately recognised the hoard’s significance, and persuaded Ford to allow him to take some pieces to the British Museum for analysis. Having established that the items were indeed Roman silver, Christopher Hawkes at the British Museum sent Fawcett back to Suffolk to persuade Ford to declare the find. Not surprisingly, Syd was not taken with the idea.

For further information about the Mildenhall Treasure, see the full article in CA 229.