The Roman writer Tacitus says that 30,000 Caledonians massed to stop the Roman invasion under Agricola in AD 84. The bloody battle of Mons Graupius may have been fought near Inverness. Now a major site of the period has been uncovered in the area – complete with two huge residences, a cluster of smaller houses, and the biggest industrial complex ever found in Iron Age Scotland. Excavator Ross Murray of Headland Archaeology describes the discoveries.

In June 2005 we began excavating a palisaded enclosure at Culduthel Farm on the southern outskirts of Inverness in advance of a housing development. The enclosure was visible on air-photos, and trial trenches had confirmed its location and picked up other archaeological features around it. Once the topsoil had been removed we could tell that the enclosure was not the focus of the settlement. A few hundred metres to the northwest, not visible on the air-photos, we uncovered part of an astonishingly wellpreserved Iron Age settlement with industrial remains on a scale not previously seen on the Scottish mainland.

The settlement was situated on a terrace overlooking present-day Inverness and commanding clear views over the valley at the top of the Great Glen. It would have dominated the landscape, part of the rich coastal plain of the Moray Firth. 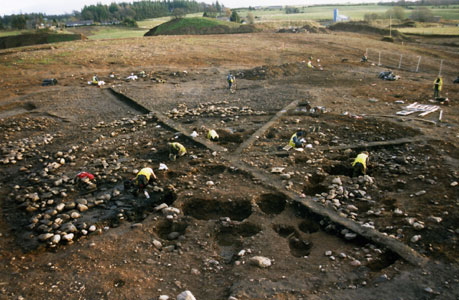 The second of two large roundhouses found on Culduthel Farm near Inverness under excavation. There were also 15 smaller roundhouses and an industrial area with numerous smelting furnaces and huge dumps of iron slag. The site had been a major metal-working centre in the Late Iron Age.

A total of 17 roundhouses were excavated, and several of these had been exceptionally well preserved beneath layers of hillwash that had sealed the Iron Age surface and protected the remains from the plough. All were constructed with an internal post-circle, and most had an entrance porch facing north-east, away from the bitter prevailing wind. While all the buildings were large, two in particular stood out for their size and complexity. These had been built with an internal post-ring that would have held enormous uprights. Many of the postholes were up to 1.5m in diameter and the same again in depth, and the posts they once contained had been held in place with large packing stones. Surrounding one of these two post-circles was a broad ring-ditch that had been filled with collapsed drystone walling and burnt structural timbers. Up to 4m wide and 80cm deep, the ring-ditch seems to have been an outer lowerlevel floor within the structure running around a raised central area. Excavating with great care, we concluded that the burnt timbers were the remains of joists and planks from wooden flooring. Enclosing the ring-ditch and forming the foundation for the outer wall of the house was a narrow ring-groove.

The other of the two large structures measured 19.5m in diameter, making it one of the largest roundhouses found in Scotland. Only when we erected a scaffold tower to photograph the whole building did we realise that there were three phases of dwelling on the same spot, each grander than the last. The final phase had an elaborate turf and stone façade that extended across the front of the house and also enclosed a small annex that may have been a stable.

The façade seems to have been purely cosmetic, giving the house a monumental appearance from the front, an appearance maintained into the interior by having the entrance-way paved with flagstones. Once inside, the massive upright timbers supporting the roof would have dominated the internal space. We think there may have been an upper storey accessed by ladders, the footings of which we have tentatively identified.

Everything about the structure suggests an occupant of great importance. So does the quality of the artefacts recovered, some of which were deliberately deposited during the construction and demolition of the house. The tang of an iron sword, placed in a posthole ‘Every stage in the industrial process from ore to artefact was represented.’ during construction, and an iron sickle and Roman coin, placed in the ring-ditch, would be rare finds on any Iron Age site in Scotland. At Culdthel this seems to have been normal. A small iron dagger and a spearhead were also found in the postholes of other roundhouses. Most impressive of all was a complete iron sword-blade placed vertically within the packing material of another substantial roundhouse posthole.

Is the status of a warrior aristocracy represented by these finds? Is the former owner of the huge roundhouse with a stable one of the Caledonian charioteers that Tacitus reports at Mons Graupius?

One reason for the profligacy with metalwork became clear when we realised that not all the roundhouses had a domestic function. We discovered the most complete Iron Age iron-smelting furnace on the Scottish mainland in one of the first excavated roundhouses. It was clear it was not a domestic hearth as it was constructed with large edge-set stones  fused together with a crust of iron slag. Inside were the remains of the last firing. A further seven furnaces were found across the site, some with part of a clay superstructure adhering to the top. The waste from iron-smelting was littered everywhere, forming a good proportion of the deposits sealed beneath the hillwash. Finding so much, we had to change our approach to the excavation, making it more like an urban dig, with a deep sequence of numerous intercutting layers that it was our job to disentangle.

If the furnaces were not indication enough of the scale of the industry at Culduthel, the sheer quantity of iron slag provided undisputable evidence. Over 250kg was collected by hand from across the site, with each furnace containing up to 10kg. This amount of slag implies that Culduthel was a major centre for ironworking.

Every stage in the industrial process from ore to artefact was represented in the suite of features, waste material, and finds – from the smelting to create iron blooms by burning ore in furnaces, through the smithing process by which artefacts were hammered out of hot metal, to the finished products themselves. A total of 171 iron artefacts were recovered, including tools for working wood, metal and leather as well as the weapons, making the Culduthel assemblage of Iron Age metalwork the third largest from Scotland after Traprain Law and Fairy Knowe.

Industrial activity was not confined to iron production – though this does seem to have been primary. The non-ferrous metalworking debris comprises enough crucible and mould fragments to make it one of the largest late prehistoric assemblages in Northern Britain. Though not as common as iron finds, there were several high-status bronze artefacts, including an intricate cruciform horse strap-mount with relief decoration, broadly dated to the 1st-2nd century AD, a Romano-British bow-andfantail brooch decorated with inlaid rings of blue, red and yellow enamel, and the decorated guard of a sword-hilt.

One curious discovery was an ingot mould made from a re-used rotary quern. Into one side had been carved fairly typical bar and dish moulds, on the other a fish- or vaseshaped mould for casting an as-yet unknown object. At present there are no parallels for this in the Scottish Iron Age.

We also found evidence for glass-working in close association with the non-ferrous metalworking. This is of prime importance as the first secure evidence of Iron Age glassworking in Scotland; indeed, it is exceptionally rare anywhere in Britain. The evidence comprises offcuts from glass rods and a range o
f molten waste that can be attributed to the production of glass beads and enamel for decorating metal objects. In addition to the glass objects produced on site, sherds of vessel glass were recovered, most likely imported from the Roman world.

Culduthel appears to have been the seat of a Caledonian iron-master and industrialist. Though we found earlier prehistoric remains, the site rose to prominence in the Middle Iron Age and then held this position for several centuries, well into the Roman period (when a scatter of Roman coins may be evidence for trade across the frontier in the 2nd and 3rd centuries AD). No doubt the good grain-growing and grazing land of the Moray Firth coastal plain contributed to the wealth and power of the Iron Age lords of Culduthel. But it was surely for their role as suppliers of weapons, tools, enamelled brooches, and intricate glass-work that they were most noted in the days when Agricola’slegions threatened the far north.

Our cover image shows the grand edifice of Syon House…

This has been another exceptional year for archaeological research. The…