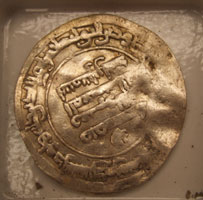 A reminder of our Viking past was recently discovered lurking beneath a Yorkshire field; what is now being called the ‘Harrogate Hoard’ is an archaeological find of global significance. Said by experts to be the most important Viking find in Britain in 150 years, the finders, metal detectorists David and Andrew Whelan, called the discovery a ‘thing of dreams’. Portable Antiquities Scheme Finds Liaison Officer Amy Cooper was one of the first on the scene with the Whelans, and here we have her account of one of the most exciting recent discoveries in Britain.

Iprobably have the honour of being the first archaeologist to see the Harrogate Hoard. The finders, David and Andrew Whelan, reported it to me as their local Portable Antiquities Scheme Finds Liaison Officer and explained to me how they had found it.

The Whelans arrived in an unprepossessing field near Harrogate with low expectations. They usually choose not to detect there, because the site normally produces nothing more exciting than Victorian buttons. Furthermore, it was freshly ploughed and deeply furrowed: not ideal conditions for detecting. They had little choice however, because most of the land on which they had permission to search was under crop.

Within less than half an hour of searching, David’s machine produced a fairly average signal, that sounded to be at a reasonable depth. After removing a trowel full of soil, the signal improved. The next couple of scoops produced fragments of lead sheet and then a spherical, mud-covered item appeared in the bottom of the hole.

David’s first reaction was that it was a ball cock from an old lead cistern, but he put his glasses on and immediately saw signs of decoration through the mud, and four coins sitting on top of what is now called ‘the cup’. Three were too encrusted with mud to be identifiable, but he recognised the fourth as an Anglo-Saxon penny of Edward the Elder (889 — 249AD).

Calling Andrew to join him, he examined the cup again. More jewellery and coins were sticking out. To their great credit, the Whelans did not remove these items, and, realising the archaeological significance of their find, they decided to get specialist advice. Their immediate concern was to get the bowl safely home, but when they looked at the hole again they discovered that in digging it out they had disturbed some silver ingots.

They gathered up the silver, and realising it might be important, diligently collected every scrap of lead. They also had the forethought to record their exact location by taking bearings from features in the landscape before refilling the hole. This proved to be particularly important, because just four days later when I accompanied an archaeologist visiting the site, heavy rain had washed away most evidence of the findspot.

Despite being experienced detectorists, the Whelans had never found Treasure before, let alone any find of this significance. For advice, they first approached a local artefact specialist who referred them to their local Portable Antiquities Scheme officer — me! Part of my job as a Finds Liaison Officer is to help with the legal responsibility to report finds of Treasure. According to the 1996 Treasure Act, there is a legal responsibility to report all finds of Treasure, including objects that are more than 300 years old when found and are more than 10% gold or silver, or any two or more gold or silver coins found together. The Whelans’ discovery clearly fell into this definition and they were entirely correct to contact me as Above A British Museum conservator removes further objects from the cup. quickly as possible. Given the range and unique character of the objects, it is certain that it will shed new light about what was going on in early tenth century England.

I first saw the hoard when the Whelans gave it into my care. Everyone was itching to know what was inside the cup, and I was very impressed that the Whelans had not removed even a little soil to reveal the coins that were half exposed. They had also resisted the hugetemptation to clean the cup in order to see the decorations. We could just make out circular panels and decipher a few of the animals within them.

In fact, David and Andrew had acted in an exemplary way. They reported promptly and fully to the landowner and the PAS, they kept the objects in optimum condition and they cooperated fully with everyone who became involved in their discovery. Their only request was that they be allowed to see the emptying of the cup, which was arranged. ‘As exciting as finding the hoard, was being welcomed to the British Museum to watch the conservator carefully remove the individual items from the cup.’ they told me later. ‘Seeing a gold bracelet gradually appear through layers of coins is something we will never forget.’

Subsequent excavation of a 2m x 2m trench over the findspot revealed a feature, interpreted as a plough furrow, which intersects with David’s hole. This is particularly interesting since it suggests that the original location of the find may lie further west than the area excavated, and that the hoard may have been dragged by the plough. No other features or finds of note were discovered. A geophysical survey has also failed to find any archaeological features in the area, suggesting that the hoard is ,not part of a larger site. Further excavation is planned which may confirm this.

The size and quality of the Harrogate Hoard is amazing. The rare objects in the collection come from as far away as Afghanistan, Ireland, Russia and Scandinavia. It is the second largest Viking hoard ever found, only smaller than the famous Cuerdale Hoard, which contained over 8,500 objects. The Harrogate silver gilt cup is so rare it is only the second of its kind ever to be found in Britain, and is among only six or seven known in Europe. Additionally, there were 617 coins, 67 pieces of silver including arm-rings and hacksilver, a gold arm-ring and the lead fragments. All but the eleven largest objects were packed inside the cup. Much of the hacksilver is typically Viking and the decayed lead sheet appears to have formed a covering or box. The cup is closely paralleled by the Halton Moor cup, on display in the British Museum. Both are from the same Carolingian workshop and were produced in the mid- 9th century. They may have had lids and been used to hold consecrated bread. ‘The decoration on the cup is incredible,’ remarked David, ‘with animals such as deer and a horse with panicstricken expressions being chased around thecup by lions.’

The coins date from the late 9th and early 10th centuries. They include Anglo-Saxon, Anglo-Viking, Carolingian and Islamic types, which is typical of early 10th century Viking hoards. The latest coins are those of the Anglo- Saxon king Aethelstan (c.924-39AD). There are many examples of his fairly rare ‘church’ type, which was probably introduced in c.927 AD. However, there is only one example of the Rex Totius Britanniae type. This is usually very common, suggesting that the hoard was deposited soon after it started to be minted, probably in c.928 AD.

Further analysis should provide new insights   into the Early Medieval period. The coins are particularly interesting because they include several new and rare types. ‘It is amazing that our hobby has produced something of such significance’ said Andrew, ‘and that it will hopefully further our knowledge of the period and fill in some of the blanks in numismatic, understanding.’ Excavating the cup in a laboratory means that we know the order in which the coins were placed in it, which may be vital and would not be possible if the Whelans had not had been so responsible.

Hoards seem normally to have been buried during times of trouble, both by people trying to keep their possessions safe, and by the people causing the trouble who needed to hide their loot. In the early tenth century, the Anglo- Saxon kingdoms were actively engaged in trying to deal with the political situation caused by the Vikings in the north. This tension may explain the fairly high number of coin hoards that are believed to have been buried at this time. We think that most buried hoards were recovered by their owners. The discovery of an unclaimed hoard suggests that some dire misfortune befell the owner, who was probably a local chieftain.

The coroner has legally declared the Harrogate Hoard as treasure, but it has not yet been valued. It is hoped the hoard will be acquired by Harrogate Museum, York Museums Trust and the British Museum in partnership. They will have to pay the full market value, which will be divided between the finders and the landowner. It is planned to display the Hoard at all three museums and it may also tour the country, allowing it to be seen by as many people as possible. It is the find of a lifetime and certainly a bit more exciting than the Victorian buttons which the Whelans were expecting to find!