The medieval castle is one of the great glories of British archaeology. The finest are those in North Wales, the products of the conquest of Wales by Edward Ist, in the years just before 1300. One of the most majestic is Conwy (or Conway), and here Arnold Taylor, the former Chief Inspector of Ancient Monuments describes Conwy, and how he succeeded in improving the surroundings to make it the great monument that it is today. 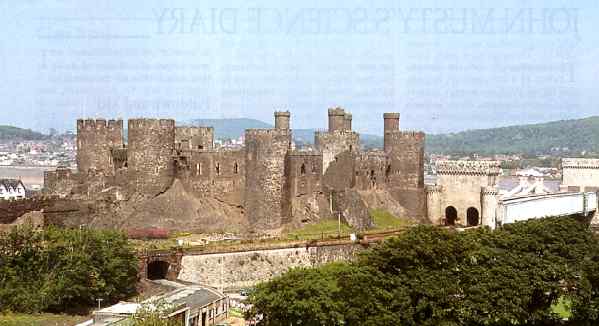 Conwy Castle (above) was built in only 7 years. After his conquest of Wales in 1283, Edward I set out to hold down the country with a series of magnificent castles of which Conwy, guarding the crossing of the river Conway, was one of the largest. Not only was there a castle, but also a fortified town: the town walls still survive in their entirety, making this one of the finest surviving fortified medieval towns in the world.
But note the railway, constructed in 1846, running just along the edge of the castle: we shall be seeing this later. Note too to the far right, how this enters Robert Stephenson’s famous ‘Tubular Bridge’ over the river, the entrance suitable adorned with mock fortifications.

The Bridge that Never Was 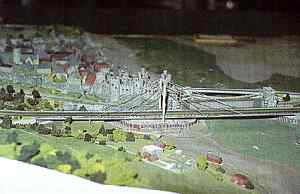 1972, it was proposed to run a new dual-carriageway road along the coast of North Wales. How to take it over the River Conway? The initial plan was to construct a giant suspension bridge, as shown in the photo. Arnold Taylor, the Chief Inspector of Ancient Monuments, (and source of our article) was aghast. He was allowed to see the model, and while his fellow inspectors detracted the attention of the road planners, he surreptitiously took this photo.
There was an outcry against the proposals (supported behind the scenes by the Chief Inspector) and the road now runs in a tunnel on the bed of the river, and the photo above shows how the castle has survived today. 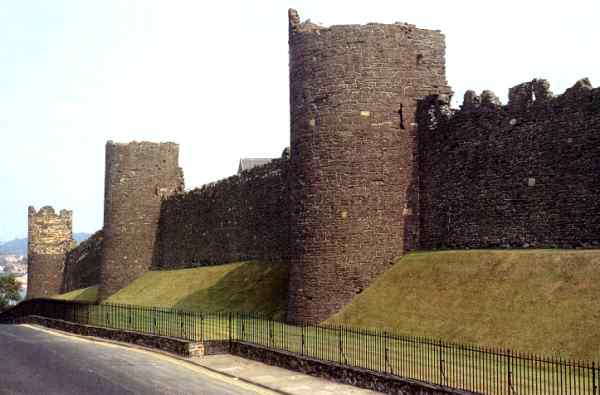 Conwy Castle is a double monument. On the one hand there is the castle, with its eight great towers, on the other the town wall with its three double-towered gateways and 21 of the original 22 flanking towers still standing to their full height. The whole ensemble had been built 700 years ago in a single operation, in a mere half-dozen years, and has scarcely been altered since. 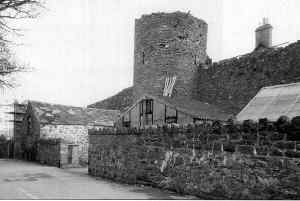 When Arnold Taylor first came to Conwy the walls were largely concealed by numerous garages, sheds and outhouses – to say nothing of the fire-station, two electricity sub-stations, and the town mortuary. The photo on the left, taken in black and white in 1956 shows things as they were. The photo above shows the same view today

On the south side of the castle runs the railway. The above photo shows the accompanying scrap yard in February 1969.
The photo below shows the same view in October 1991 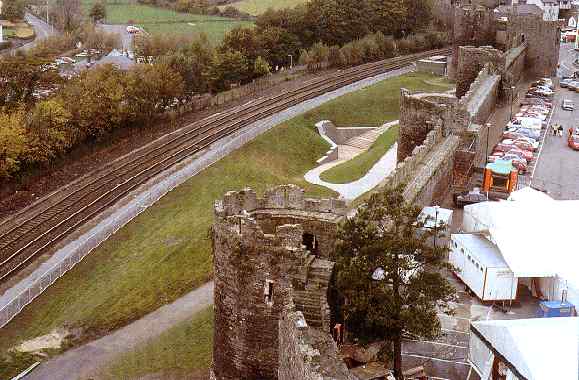 The south side of the castle, with scrap yard removed and visitor walkway substituted. 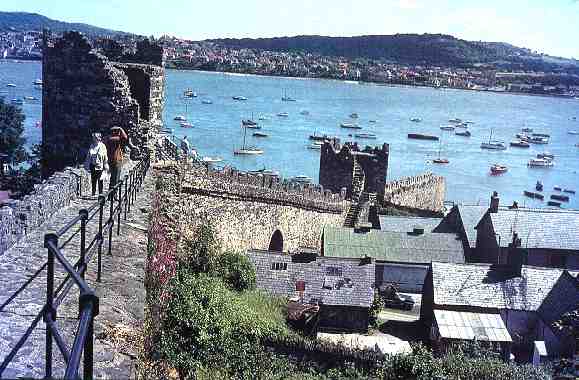 Conwy was not just a castle – it was also a town. Edward I introduced English settlers to man the town and hold it against the hostile Welsh. Here we see the town defences running down to the harbour – as restored by the Ministry of Works in the 1970s 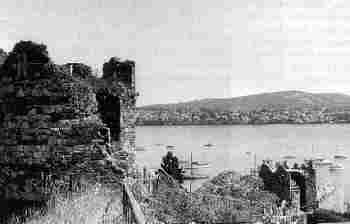 Here we see the same view as above, before the restoration made it possible to walk the walls.

Our thanks to Arnold Taylor for the photographs that make up this tour.

Conwy Castle was a special feature in Current Archaeology 150

Our cover image shows the grand edifice of Syon House…

This has been another exceptional year for archaeological research. The…