In the Middle Ages, life was communal, and the basic building structure was the open hall. Even comparatively grand structures, such as manor houses, consisted mainly of a large open hall with a fire at the centre, where the smoke escaped up to the rafters and through the thatched roof.

A good example of such a manor house was that recently excavated at Wood Hall, near Womersley, east of Pontefract, in Yorkshire. 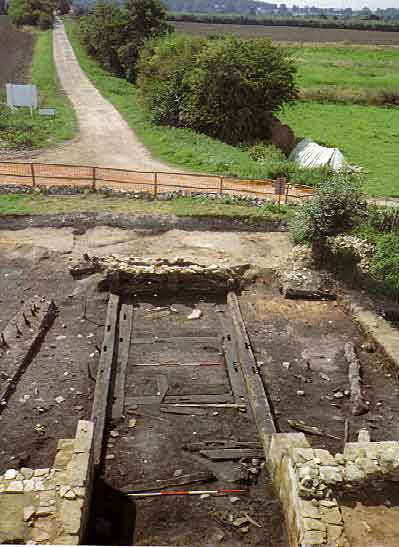 Wood Hall was a moated manor house: the manor was surrounded by a moat to provide an element of protection. Here we see the long causeway that forms the approach to the site and also the excavated moat, on the bottom of which the foundations of the successive bridges and drawbridges that spanned the moat were still found, perfectly preserved.

At the heart of every medieval manor complex was the hall, a large room open to the rafters, where everyone lived together except the lord and his family who had a private quarters at one end, known as the ‘solar’

The hall was built mostly of timber, and here the coloured strings mark the position of the walls.

Originally it was a single large room heated by a large hearth half way down the right hand side, with only a small ‘solar’ or private room at the near end. In the 1490s a cellar, which formed a buttery was added in the far right corner. 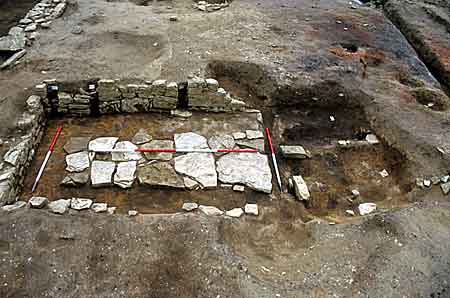 In the 15th or 16th centuries, the Middle Ages came to an end. There was a Reformation in the church; there was a Renaissance in the Arts and Architecture, and the life of Europe changes gear into the beginnings of the modern world. But it is in archaeology that the greatest and probably the most profound change can be seen in what is known as the Great Rebuilding, well illustrated at Wood Hall.

This was a process by which the open halls of the Middle Ages give way to the houses that are the forerunners of those of today – the single hall being replaced by a number of smaller rooms. The halls often remained, but ceilings were inserted, to form upper floors. There was an internal staircase, and the spaces were divided up into a number of smaller, more cosy rooms, with central fireplaces.

Here we see the evidence: the foot of the staircase that led to the first floor. Note the recesses in the far wall that held the timber uprights for the new wooden partition dividing up the house: there was no longer a single open hall:even the great hall was subdivided into a number of smaller rooms. 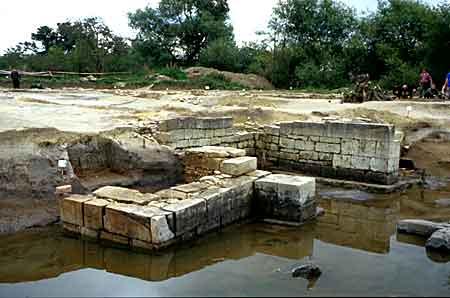 There was further evidence for the changes: the gatehouse at the edge of the moat was rebuilt in stone – the first stone building on the site, – indeed not just stone but carved stone, known as ashlar.

But it was not just a gatehouse: the upper floor was clearly a feasting hall, where the men could have their feasts in private, away from the rest of the household. After the feasts, they sometimes opened the windows and tipped the remains into the moat – where the archaeologists discovered a fine collection of domestic knives, oyster shells, and even the remains of three Venetian glass drinking vessels. It may even have been a smoking room, for some early clay tobacco pipes were found in the moat. 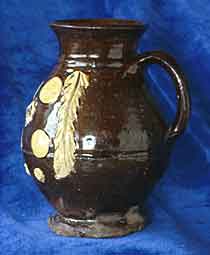 By the 16th century the green glazed wares of the Middle Ages were being replaced by the thick dark brown glazes of post-medieval pottery. This fine jug was made at Wrenthorpe, near Wakefield, in the mid 16th century.

This is based on a fuller account in Current Archaeology 166, published in December 1999