Roman Britain does not just consist of grand buildings. There are also smaller buildings out in the countryside, and at Littlehay, near Derby, the local society excavated one such barn on their own initiative – reminding us that local societies can still make a major contribution to archaeology. 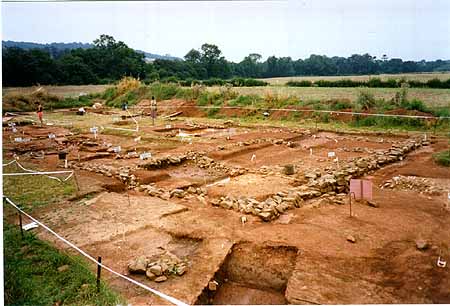 Lurking unexpectedly in the middle of the fields is this rather large Roman aisled barn. For many years the Ockbrook Local History Society has been walking the fields in this area and finding Roman pottery, so eventually they decided to excavate. They soon found the footings of a hitherto unknown Roman building 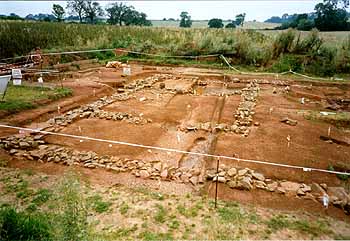 The building soon proved to be a rather large Roman barn, with the roof supported by two rows of internal pillars, maiking it an aisled building, not unlike a church.

At one end there were two rooms – seen right – but otherwise there was no sign that the barn had ever been occupied. 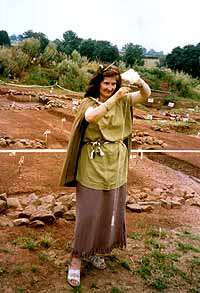 The excavation was carried out entirely by members of the local history society, led by Alan Palfreyman and Barrie Wilson.

Here we see one of the members of the society, Malise McGuire, dressed in Celtic constume, and demonstrating the art of spinning, using a Roman spindle whorl discovered in the excavation, and using wool gathered from the local fields.

The site lies on Littlehay Grange farm, near Ockbrook, just to the east of Derby, in the centre of England. It has now been back-filled, and there is nothing to see.