While the Romans were civilising England, life was very different story in Northern Scotland, and particularly in the outer isles, Orkney and the Hebrides.

Here we are faced with something entirely different, with a completely new vocabulary of brochs and duns and wheelhouses.

The most exotic are the brochs – tall, defensive towers built of stone – very different to the hillforts of southern Britain. These huge circular towers are one of the greatest monuments of British archaeology, but in the Western Isles they have been little studied in modern times. What was their date? What was their relation to other similar structures – the duns and wheelhouses?

One of the finest of these is Dun Carloway, seen above, which lies not far from the famous stone circles at Callanish. However the recent excavations have taken place in an area to the west of Callanish known as the Valtos Peninsula. Here, the Edinburgh team chose three sites for excavation: a broch at Berie; an island dun on Loch Varavat (or Bharabhat in Gaelic); and a wheelhouse at Kneep (Cnip) which was being eroded by the sea and was therefore excavated by Ian Armit as a rescue excavation funded by Historic Scotland. 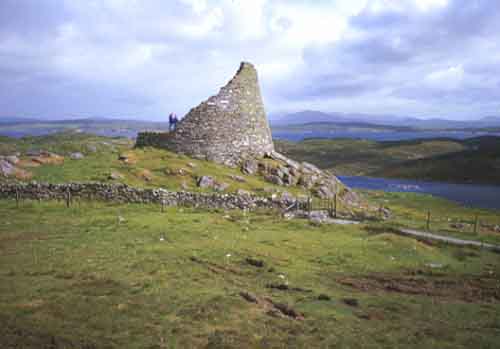 The finest of the brochs, Dun Carloway 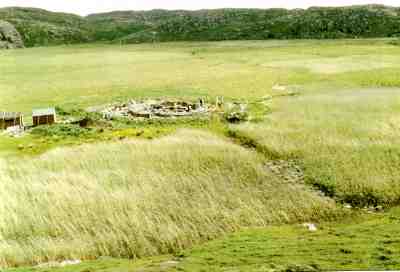 The broch at Loch na Berie under excavation. Much of the surrounding green consists of reeds standing in ten feet of water. The broch itself probably still stands at least six feet high.

The major excavation is the broch in the Loch na Berie. This is situated in a coastal inlet behind the sand-dunes, and at first sight it appears to be built entirely on dry land surrounded by reeds. But appearances are deceptive, for it is in fact built on the edge of a loch and the reeds are growing in deep water: an unwary step can land the visitor in 6 feet of water.

The broch was first noted in the Royal Commission Inventory of 1928 when it was presciently named as a broch. The excavations soon confirmed this, for the surrounding defensive wall is hollow. However the excavations soon made it clear that the broch survives to first floor level. The hollow walls are bridged by flagstones and under the flagstones could be seen the underlying cells, with the staircase coming up to first floor level and indeed continuing upwards.

The earlier levels of the broch are submerged to a depth of around two metres; more correctly, silting up of the loch, and the consequent rise in water table has progressively engulfed the lower levels of the broch, so that each successive re-occupation had to rebuild at a slightly higher level. The nett result is that the lower phases of construction have not been damaged by the later nearly so much as they would have been in normal circumstances; furthermore the waterlogging of the lower levels means that organic and environmental materials are remarkably well preserved.

The excavations, therefore, concentrated initially on the later phases of re-occupation within the broch interior. On the top was a Pictish phase, now removed, dating to the 5th to 8th centuries AD. This comprised a figure of eight structure from which a number of objects which are normally classified as Pictish were discovered – penannular brooches, bronze tweezers, an assortment of bronze and bone pins, composite bone combs and crucibles for bronze casting.

The other site being currently excavated is on Loch Varavat. This presents more of a challenge to the excavators for it is sited half a mile away but on a higher level. To approach, it is necessary to clamber up a steep ravine which forms the only exit to the loch. On the way, one passes three well-preserved horizontal mills out of an original series of five. 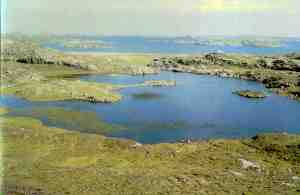 Loch Varavat – a typical West Lewis landscape. On the island in the lake approached by a narrow causeway is the island dun where the excavations are taking place – the archaeologist’s tower is visible on the original photo.

The site is what is known as an ‘island dun’, that is, a defence constructed on a small island on a loch approached by a causeway. There are many such island duns in the numerous lochs of the Hebrides and Dr Dixon, who is in charge of the diving unit of the Edinburgh department and is a director of the Scottish Trust for Underwater Archaeology, has spent a number of seasons investigating suitable islands to check for the existence of duns. 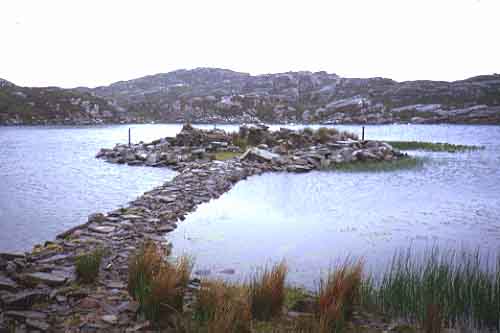 The Loch Varavat dun produced its own surprises. Recorded by the Royal Commission as a simple (i.e. solid-walled) dun, it proved to have features rather like a broch, but on a smaller scale. Furthermore, three radiocarbon dates have so far been obtained, one of 650 b.c. for a primary or immediately pre-dun level, and two around 100 b.c. for the secondary occupation and final abandonment, a dating span which is rather earlier than has sometimes been suggested for duns in Atlantic Scotland. The causeway approached the dun from the west shore, but the entrance was on the east, so there must have been a catwalk around the base of the dun. (See final pic)

Alan Braby’s reconstruction of the Cnip wheelhouse with building in progress. The subterranean wheelhouse is approached by a long passage.

The third site to be excavated on the Valtos peninsula was a wheelhouse. The existence of a wheelhouse settlement had been suspected from finds exposed by storm-damage along the sea-shore over the years, but when the Council simultaneously planned the construction of a new sea-wall to inhibit further erosion, and to introduce a new sewage system for the township of Cnip, Historic Scotland agreed to fund a proper rescue excavation of the site.

Excavation proved that the site underwent three main phases of occupation. It began as a classic wheelhouse, or rather as a pair of wheelhouses, the second of which was abandoned half way through construction, thus enabling the excavators to work out the stages by which wheelhouses would have been built. Wheelhouses in the machair sand were semi-subterranean, so the builders began by digging a large cylindrical pit and a long trench that formed the approach way. The pit was then lined with dry-stone walling, putting the smaller stones at the bottom and the larger stones at the top in anticipation of the progressive inward corbelling of the roofing.

Radiocarbon dates from the site suggest that the wheelhouse had its origins in the closing centuries B.C., rather than in the post-broch era to which the type has been conventionally assigned. There were also substantial amounts of pottery, decorated in the earlier phases but mostly plain in the later phases, the implication again being that the first two phases were probably BC and the final stage was in the early centuries AD. Taken together with the results from Varavat and Berie, there is every prospect that, for the first time, it will be possible to work out a local pottery sequence which will serve as a model for the region.

The new history of the Iron Age 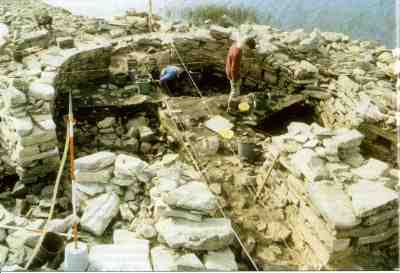 Excavating the island broch on Loch Varavat.Although the doorway is at the bottom , the causeway by which it is approached is top left.

As a result of this work, a new outline story of the Iron Age in the Hebrides is beginning to emerge. The old concerns about the origins of the brochs and duns have been largely forgotten. Instead, new concerns are coming to the fore. It is clear that major changes occurred in the opening centuries AD, when buildings became less monumental and more domestic in construction and appearance.

Wheelhouses, too, are undergoing a re-assessment; instead of being seen as successors to the brochs they are beginning to be seen as contemporaries, and going through their own sequence of development. But neither their chronology nor their geographical distribution is completely coincident with brochs. Brochs, duns and wheelhouses are plainly related variants on the Atlantic roundhouse theme, but a good deal more thought will be necessary before the new insights sparked off by the current spate of field research in the Western Isles can be fully evaluated. 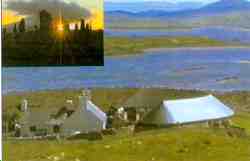 In the photo, the farmhouse is on the left, the new visitor centre is on the right, while inserted top left is a photo of the stones.

The work is being done by Edinburgh University’s Callanish Research Centre. This was originally a farmhouse, but as it lay adjacent to the famous stone circles of Callanish, it was purchased by the university and turned into a Reserach Centre. The Callanish Archaeological Research Centre must be one of the most evocative in the world. Set adjacent to the Callanish standing stones, hidden from it only by an outcrop of rock, it is an obvious site for archaeological inspiration. Shortly after Dennis Harding was appointed the Abercromby Professor of Archaeology at Edinburgh, he began looking for a site for an archaeological field centre in Western Scotland and suddenly in 1985 a magical name appeared: Callanish Farm on the Isle of Lewis in the Outer Hebrides, 200 acres plus farmhouse adjacent to the most famous standing stones in Western Europe after Stonehenge and Carnac.

This has now been turned into a Visitor Centre. It is a semicircular structure, one end externally in black-house style housing an exhibition, then a shop, then a restaurant, and finally a toilet block.

The full account, with numerous colour pictures, can be read in Current Archaeology 147.