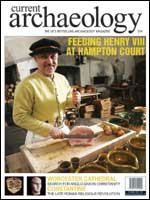 We hear a lot about Vikings in early medieval history books like the Anglo-Saxon Chronicle. But when it comes to archaeology, Vikings are rather hard to find. So when metal-detectorist Peter Adams turned up first one, then a second Viking ‘tortoise’ brooch on a Cumbrian hilltop, local archaeologists got interested.

In our first feature this issue, veteran field archaeologist Mark Brennand describes the excavation of a rare Viking cemetery.Then we travel to the other end of England for a Roman mystery. It concerns an obscure governor of Britain called Gaius Sallustius Lucullus. Or we used to think he was obscure. Now Miles Russell is convinced he knows exactly who he was – a member of the leading Celtic royal family in Britain, no less – and if Miles is right, we might have to rewrite the entire history of Early Roman Britain. Next we fast-forward to the reign of Henry VIII. At Hampton Court, a team of archaeologists and historians have been reconstructing the work of the Tudor kitchens. They have reached some startling conclusions: recipe books and broken crockery, it seems, contain clues to nothing short of a cultural revolution in early 16th century England. Our fourth feature celebrates a major anniversary: the elevation of Constantine as Roman emperor on 25 July AD 306 in the city of York. Constantine made Christianity legal and respectable. Within a century, Christianity had swept the board. Or had it? We review a major Constantine exhibition at York, and David Petts assesses the evidence for Christianity in Late Roman Britain – and concludes it was a rather ‘pagan’ version of the new religion. Our last big story comes from Worcester. Here, archaeologists have been searching for evidence of Anglo-Saxon origins amid the foundations of the great Norman cathedral. They have found some hefty masonry and a lot of burials – but are they Anglo-Saxon? News, Books and The Last Word are here, too, plus an index for the last two years of CA to help you find that old article you vaguely remember reading.