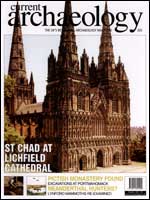 St Chad is one of Britain’s least known saints and his cathedral at Lichfield is one of the least known of our great cathedrals – even though it is the only cathedral that has three medieval spires. Recently there has been a major engineering campaign undertaken in the heart of the cathedral to provide a rising floor, so that when it is not being used as a cathedral it can be used as a concert hall. Would the missing shrine of St Chad be discovered? Warwick Rodwell who has been the cathedral archaeologist for 20 years, describes the remarkable discoveries.

The Picts are always a problem. They are best known for their magnificent carved stones, but where were these stones carved? At Portmahomack or Tarbat, on the far north-east corner of Scotland, Professor Martin Carver, fresh from his triumphs at Sutton Hoo, spent 10 years investigating what he believes to be a monastery. His greatest discovery was what he thinks is a a vellum manufactory, where leather was prepared to be turned into vellum on which gospels could be written, – which means that the site must be monastic. This is very clever – read all about it.

Then for something completely different. We go right back into the Palaeolithic, to around 60,000 years ago, at a time of global cooling when Britain was too cold to grow many trees, but warm enough to grow lush grass on which herds of mammoths grazed. Some of these mammoths became mired in a pool at Lynford where they were chopped up by the Old Stone Age hunters. The outline of the story has already been told in CA 182, but were the mammoths hunted or merely scavenged? Recent analysis of the bones throws new light on the activities of Palaeolithic hunters.

Then to a period of a century or so before the Roman invasions, when the Celts began using coins. From these coins, a history of sorts can be derived, even with the names of some of the kings. Here Chris Rudd, former business man turned Celtic coin expert, describes how four new kings can be identified.

The article in our last issue proposing Lucullus as a new governor of Britain brought in a flood of letters, mostly shooting it down; we print the best, the author will reply in the next issue. Then Professor Anthony Birley, who was wheeled out on television to tell us all about the headless Romans found in York, explains to us what really happened.