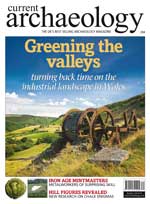 Issue 234 begins by highlighting just how important the little things are in archaeology: what can we learn from Late Roman military insignia? More than a mere fashion statement, these markers show surprising movements, links and trends. What about fragments of Iron Age coin moulds? These discarded lumps of clay are evidence that skilful artisans understood the intrinsic value of money.   Moving from the tiny to the huge: new dating techniques are determining the age of hillside chalk figures and, in so doing, are challenging previous ideas. We then visit Hill Hall to discuss the evolution of this once-grand Elizabethan house; and, finally, on to Blaenau Gwent, where the remains of the Industrial Revolution that defined this region for 200 years have been conserved and made accessible through a new project.

Buckles, belts and borders
Regional differences of style in buckles and belt-fittings can be used to build a picture of the political turmoil during the last days of the Western Roman Empire. Stuart Laycock’s new evidence shows how these archaeological markers can also show collaboration, co-operation and conquest.

Making a mint
According to Roman propaganda, the wild natives of Britannia were backward and barbarous. However, a new study of coin-making debris is showing that they were, in fact, metalworkers of a skill equal to those of Rome. We take a look at the evidence left behind by these tribal mintmasters.

Galloping down the centuries
Study of chalk hill-figures in Britain has traditionally been an exercise in speculation. Now, improved dating technology is helping to unravel their mystery, placing them more securely in an historical context. Paul Newman explains.

Hill Hall
One of the first classical Renaissance houses built in England, Hill Hall endured a fall from grace, eventually becoming a prison and finally gutted by fire. Paul Drury excavated and studied the house, to discover its evolution and its significance.

Greening the valleys
Many of the naturally beautiful, green valleys of south Wales were ravaged by the coal and iron industries during the Industrial Revolution. Frank Olding discusses how the Green Mines project has worked to conserve and present the archaeology, physical remains and historical landscape of Blaenau Gwent.