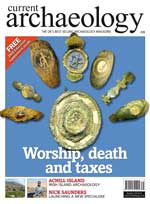 This month, we are very pleased to launch the first of what will be an annual Education Supplement. This special section will contain information on everything you need to know about studying archaeology in the United Kingdom, including courses of study, universities, specialisms, perspectives from academics, professionals and recent graduates, and guidance about how to choose the best option for your interests and career goals.

Along with the annual Digs Special, we hope that the Education Supplement will become a tool for our readers and their families, and anyone else who is enthusiastic to learn more about archaeology.
We’ve also rounded up some great features, including new research, a profile of a very active field school, and an in-depth look at a new archaeological sub-discipline.

The Northamptonshire town of Higham Ferrers is well-known to have been a prosperous medieval borough, with a castle and many fine buildings from the period. Recent research has shown that the site is robustly multi-period, with significant Iron Age, Roman and Saxon activity.   Alan Hardy takes up the story of two very important discoveries.

Norfolk
The Norfolk Museums and Archaeology Service receives enquires about Boudica and her world almost every month of the year.   Norfolk archaeologist John Davies has recently published a book on the archaeology of Boudica’s homeland, and we reveal what these discoveries tell about Britain’s warrior queen.

Achill Island
Ireland’s second largest island, Achill, has been settled since the Neolithic and is well-known for very fine chambered tombs and traces of ancient agriculture.   Recent research on an 18/19th century deserted village is turning up surprising results about how the islanders fared during the Great Famine.

Nick Saunders
Bristol University is launching the first-ever degree course in a new specialism: Modern Conflict Archaeology. Dr Nick Saunders, the driving force behind the programme, discusses how this blend of archaeology and anthropology gives insight to, and awareness of, humanity’s recent history of industrialised violence.

Smalltalk
Dates for your archaeology diary.

Diary
Morris and the Prince; The soul of Trafalgar Square; Stone on stone; And the fifth; No more silly walks; Tales of longevity; Cromwell’s many skulls.

Annual Education Supplement 2009
A complete guide to studying archaeology in the UK.