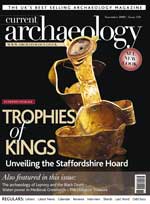 What a month! We thought we had big news at Current Archaeology — preparing to launch our new design in issue 236 — until the Staffordshire Hoard came along and upstaged us. We really hope you like what we’ve done with the new look. And what better way to introduce our redesign than with the dramatic discovery of Britain’s first-ever Anglo-Saxon hoard? A story like the Staffordshire Hoard is a once-in-a-lifetime occurrence. It has been thrilling to prepare it for CA, and to have the opportunity to get close to the experts who were on the scene. Nothing can prepare you for actually seeing these spectacular finds; they are, quite literally, breathtaking. In our coverage we’ve included all the details of how the hoard was discovered and excavated, as well as exactly what was found, and the first reports of what it might all mean. There are exciting times ahead.

Trophies of Kings: The Staffordshire Hoard
Is this the trophy cache of a mighty Anglo-Saxon warrior king?

Leprosy and the Black Death: The archaeology of plague
Excavating evidence of Medieval pandemic infections.

The Hallaton Treasure: Evidence of a new kind of shrine?
What links a rare Roman helmet, thousands of Iron Age coins, and a mass of pig bones?

Last Word
Our Editor in Chief takes us on a pilgrimage to Hadrian’s Wall.