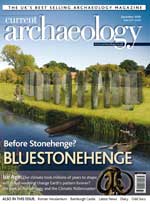 It’s been another big month for archaeology! Hard on the heels of the Staffordshire Hoard comes another amazing discovery: Bluestonehenge. Though official results on the dating of the new circle aren’t expected until January, the untimely leak of information about the excavations to the press has forced the team to release initial results; and they are fascinating, indeed. What will be revealed by this new chapter in the Stonehenge story?
We follow Bluestonehenge with another hot topic: climate change. Our feature, based on Brian Fagan’s new book (published in October) takes a hard look at what the archaeology of climate change can predict about the future of our climate. Will the planet freeze over once more?
Finally, we are thrilled to announce that both Brian Fagan and the Stonehenge Riverside Project team will be speaking at Archaeology 2010 at the British Museum; Be sure to come along: programme and registration details will be available soon.

ICE AGE
Archaeology and the Climatic Rollercoaster
We look at Brian Fagan’s new book and review the findings of Ice Age specialists.

BLUESTONEHENGE
The Stonehenge Story: a new chapter
Was this new henge on the Avon the first stop for 24 of Stonehenge’s bluestones?

THE END OF ROMAN VERULAMIUM
Re-dating a Roman Town
The dating of Verulamium is being challenged; is the ‘long chronology’ wrong?

Reviews
Books this month: Anatomy of a Tudor Warship; An Archaeology of Town Commons in England; Norman Churches in the Canterbury Diocese; 101 Things to do with a Stone Circle.

Opinion
Metal-detecting, the media, and the Staffordshire Hoard.